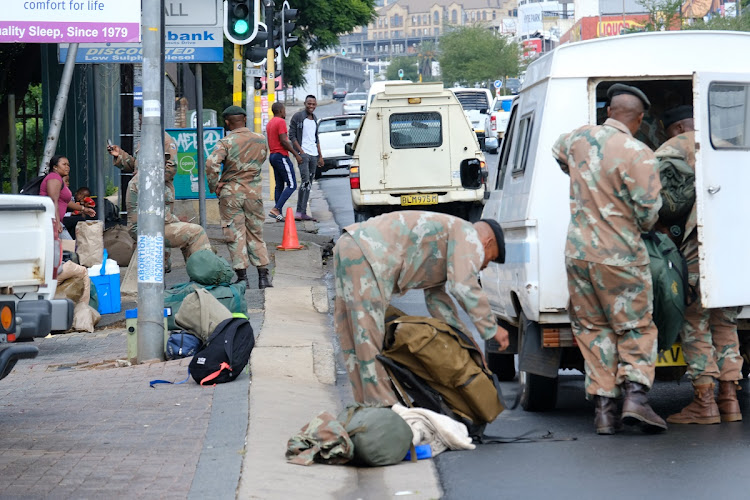 Earlier this month, President Cyril Ramaphosa said he 'deeply regretted' the death of Collins Khosa and 10 other South Africans allegedly at the hands of the country's security forces during the Covid-19 lockdown.
Image: Gallo Images/Dino Lloyd

Police are investigating three cases in which soldiers are accused of assaulting civilians.

A fourth case of a solider allegedly assaulting a colleague is also under investigation.

This is according to defence minister Nosiviwe Mapisa-Nqakula, who revealed in a written reply to a parliamentary question published on Tuesday that - with the exception of the widely reported Collins Khosa case - the department's internal board of inquiry had not been convened to deal with the other cases.

She understood, however, that the military ombud and/or the SA Human Rights Commission were also investigating incidents.

Mapisa-Nqakula was responding to a question from Inkatha Freedom Party MP Russel Nsikayezwe Cebekhulu, who wanted to know the number of cases of misconduct by soldiers in which civilians had fallen victim since the beginning of the lockdown on March 26.

Cebekhulu also asked about any disciplinary action that may have been taken in those cases.

Mapisa-Nqakula cited the Khosa case, in which the Alexandra man died after he was allegedly beaten by soldiers.

Two children were shot and injured during a farm robbery in Limpopo, police said on Sunday.
News
1 year ago

She said an internal investigation in the form of an SANDF board of inquiry was conducted and finalised, and the members who were allegedly involved were placed on special leave to allow the police investigation to run smoothly.

“Allowing SAPS process to proceed will also assist to determine what the cause of death is. It must also be mentioned that another parallel investigation by the military ombud would be done as directed by the minister,” she said.

Mapisa-Nqakula did not mention in her written reply that the internal board of inquiry cleared the soldiers of wrongdoing.

Mapisa-Nqakula also mentioned a case in which soldiers were captured on video assaulting a man in Sebokeng. The video went viral on social media.

“Those members have since appeared on negative office orders, where they were duly reprimanded and warned against such behaviour. An assault case has been opened under Sebokeng and is still under investigation,” said the minister.

She said no internal investigation was convened since the matter was handled through the officer commanding orders process.

The third case  the defence minister mentioned was an alleged common law assault case in Cato Manor, KwaZulu-Natal. She said the matter came to the military's attention when a police investigating officer contacted the company commander with a view to interview SANDF members. She said there had been no internal investigation done as the matter was not reported to the defence force.

She said this incident was reported to the defence force, but  it will allow the police to carry on with their investigation into the matter. This, she said, will help determine if there are other people involved.

Earlier this month, President Cyril Ramaphosa said he “deeply regretted” the death of  Khosa and 10 other South Africans allegedly at the hands of the country's security forces during the lockdown.

He called on investigating authorities to get to the bottom of what happened, especially in the Khosa case.

“We will spare no effort in ensuring that those responsible are brought to justice and face the full might of the law,” Ramaphosa said at the time.

Neighbours of the Khosa family said they had seen soldiers assaulting Collins Khosa and his brother-in-law at their Alexandra home as new details of ...
News
1 year ago
Next Article