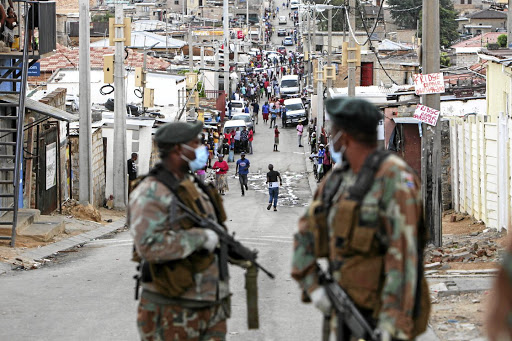 Members of the SANDF patrol the streets of Alexandra in Johannesburg on the first day of the national lockdown. / Alaister Russell

The military ombud is investigating the conduct of soldiers during their interactions with Collins Khosa's family, as well as other complaints lodged against troops during the lockdown.

Khosa, 40, of Alexandra, northern Johannesburg, died on April 10, allegedly after an altercation with soldiers and Johannesburg metro police.

He said the office of the military ombud "continues to investigate the conduct of soldiers concerning the interaction with the Khosa family" while the police were investigating a murder case.

"Our investigation is not a criminal process but a non-adversarial administrative inquiry into the conduct of members of the SANDF.

The contrasting reactions to the murders of George Floyd and Collins Khosa at the hands of the police and soldiers call for a deeper scrutiny of ...
Opinion
1 year ago

Neighbours of the Khosa family said they had seen soldiers assaulting Collins Khosa and his brother-in-law at their Alexandra home as new details of ...
News
1 year ago

"We are also allowed by law to summon any person to submit an affidavit or affirmed declaration or to appear before us to give evidence or produce any document that has a bearing on the matter," Masondo said.

His office has received 29 "valid" complaints that went through assessment from members of the public, relating to the official conduct of soldiers since the lockdown began.

Masondo said the investigations of these complaints were at different stages. "Those that are not within our mandate concerning the conduct of the police have been referred to institutions like the Independent Police Investigative Directorate [Ipid] for assistance," he said.

Masondo said it was the first time since its inception in 2012, that the office had seen an upsurge of complaints by members of the public about soldiers' conduct relating to heavy handedness, undignified treatment and unlawful confiscation of property.

He said complaints to his office should be lodged in writing using the prescribed form.