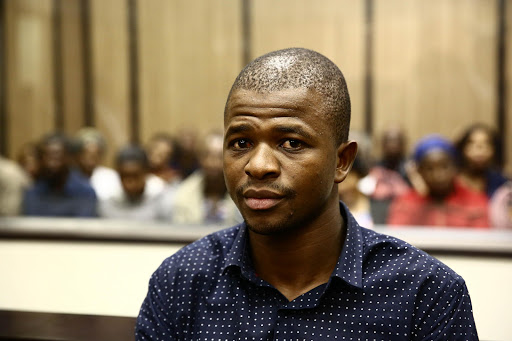 The sentencing of Thembinkosi Ngcobo was postponed on Thursday. The former SANDF rifleman in January 2017 went on a rampage, shooting and killing his girlfriend's sister.
Image: Thuli Dlamini

The state, in the murder trial of a former SANDF soldier, says it is being held to “ransom”  after sentencing was postponed for the third time.

Thembinkosi Ngcobo made yet another brief appearance in the Durban high court on Thursday, where his sentencing was postponed because he complained of being ill. This is the third time  the matter has been  postponed because of his illness.

“He went to the prison hospital (yesterday) and was given a Panado. He said he has been vomiting and was feeling dizzy. He said he was not fit to stand today,” said Ngcobo’s lawyer Mhlonipheni Sibiya.

Ngcobo sat crouched in the dock and on two occasions ran down the stairs to the holding cells as he appeared to be physically ill.

“I have some difficulty with the theatrics happening here. I have conversed with the court staff and they say he was fine when he got here. We are being held to ransom, we have no medical evidence that he is sick,” said state prosecutor advocate Krishen Shah.

The 29-year-old was found guilty of murder, 12 counts of attempted murder, kidnapping, robbery under aggravating circumstances, possession of an automatic rifle and possession of ammunition.

Ngcobo‚ an SANDF rifleman stationed at 8SAI in Upington in the Northern Cape‚ went on a rampage in January 2017 after suspecting that his girlfriend had cheated on him. During the trial, Ngcobo admitted that he drove from Upington to Durban intending to kill his girlfriend Nontokozo Mbambo and himself.

However, he denied that he was the one who opened fire at the Mbambo home, in Inanda, killing one of Mbambo's sisters and injuring another. His version was that when he got to the home he was told Mbambo was not there and left to go find her in Ntuzuma.

The kidnapping charge stems from Ngcobo kidnapping Mbambo’s brother to enlist his help in a search for his girlfriend. A policeman was also wounded while attempting to confront Ngcobo.

Judge Shyam Gyanda said the matter could not continue, as he did not want a situation where Ngcobo questioned whether he was given a fair trial if it continued while he was sick.

Gyanda ordered that Ngcobo be taken to the Westville Prison hospital and asked for a medical report detailing his illness.

“He can stay in custody for as long as he wants, he is only postponing the inevitable,” said Gyanda.

The matter is set to continue on Friday.