Deaths soar 4,000 above predictions as Covid-19 bares its teeth 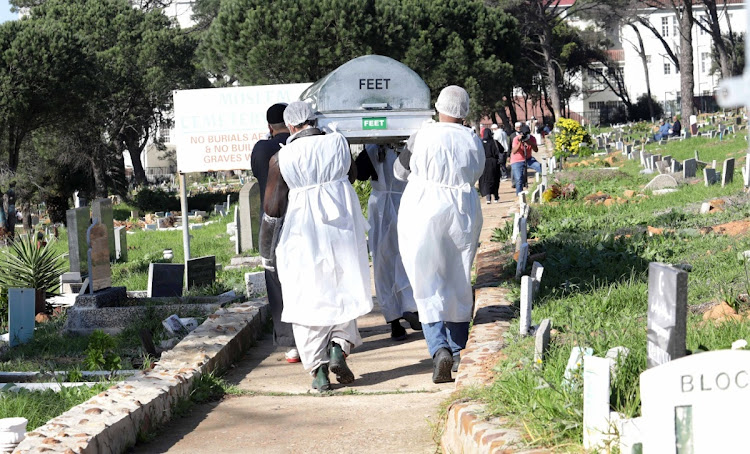 The sons of a Cape Town man who died from Covid-19 carry their father to his grave in Mowbray cemetery, Cape Town.
Image: Esa Alexander

Covid-19 has sent the number of deaths in SA “significantly higher than the predicted number based on historical data”, the Medical Research Council said on Wednesday.

The MRC's weekly report on deaths said there was an upward trend in all provinces except Mpumalanga, the Northern Cape and North West.

The authors of the report said: “This ... is an estimate of the number of deaths in excess of expectation due to the Covid-19 epidemic and not of those infected with the Sars-CoV-2 virus alone. It includes incidental deaths resulting from such things as shortage of health care and medications due to either the demands on the health systems by the virus or strategies to combat the epidemic.”

The report highlighted the Western Cape, the Eastern Cape, Gauteng and KwaZulu-Natal as provinces experiencing an excess number of natural deaths (see gallery above).

The Cape Town had 2,167 excess deaths, the three Gauteng metros of Johannesburg, Ekurhuleni and Tshwane 428, and the Eastern Cape metros of Buffalo City and Nelson Mandela Bay had 657.

“A sharp increase in natural deaths was observed in Buffalo City and the weekly number of natural deaths is significantly higher than the predicted number,” said the report.

Man fights Covid-19 in hospital, as family brace to tell him wife died of virus

“My mother has died and we don’t know how to tell my father, who is fighting for his life in hospital, that she is no more.”
News
1 year ago

Covid-19: 2,376 people are being treated in hospitals across Gauteng

Gauteng is moving closer to reaching 40,000 Covid-19 infections, and the provincial death toll had climbed to 180.
News
1 year ago

Authors Debbie Bradshaw, Ria Laubscher, Rob Dorrington, Pam Groenewald and Tom Moultrie, from the MRC burden of disease research unit, cautioned that the statistics in the report should be regarded as estimates.

“The department of home affairs has faced sporadic temporary office closures, particularly in areas that are more affected by Covid-19. This may affect our allocation of a death to a metro area,” they said.

“For example, a death that occurred in Cape Town might have been registered at an office outside the city because of a temporary closure.

“Closure may also cause a delay in the processing of the death registration which would result in an underestimate of the deaths in the most recent week. This accounts for the kinks in what should otherwise be a smooth increase in numbers of deaths in Cape Town and Buffalo City, for example.”

Deaths of people who were not on the national population register - foreigners, for example - also necessitated estimates.

As of Tuesday, 2,657 people had died of Covid-19 nationwide, and the daily increase of 128 was a record. About 70% of deaths have been in the Western Cape.

Two more children have died from Covid-19 since Friday.
News
1 year ago

Americans' anxieties over the spread of the novel coronavirus have risen to the highest level in more than a month, according to a Reuters/Ipsos ...
News
1 year ago
Next Article