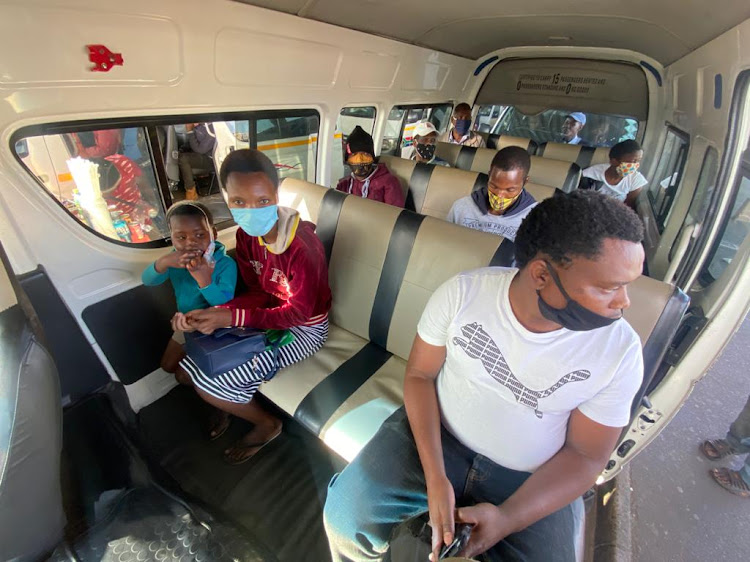 Passengers wait for a vehicle to fill to 100% capacity before leaving the Ntuzuma taxi rank in Durban on Monday.
Image: Thuli Dlamini

Taxi drivers in Durban clashed with metro police officers on Monday as the long arm of the law clamped down on taxis operating at full capacity.

In KwaMashu, north of Durban, taxi drivers halted traffic on the M25 highway after a squabble with metro police.

It is not even lunch time yet but there's already a taxi protest near Duffs Road, Kwamashu highway, they mean business!! #TaxiShutdown pic.twitter.com/cNJH7Q8anG

Sthe Masondo, rank manager at the Ntuzuma and Inanda rank in Durban, said metro police officers had been stopping vehicles and telling passengers to get out, and were arresting taxi drivers.

“We have run into roadblocks on all the roads that lead out of townships. Passengers' views differ. Some don't care about social distancing so they say we must fill up the taxi because they want to get to work. Others are concerned.”

Masondo said he fully supported the SA National Taxi Association (Santaco), which on Sunday announced it would start operating at full capacity on Monday to make up for losses suffered by the industry during the lockdown.

Martin Dube, an Umhlanga taxi rank driver, said there was not much he could do about the situation because he was given instructions by his employer, the vehicle owner.

“They instructed us to take 70% capacity and we did that. When they say we must take 100% again, we will. The sad part is that the police will arrest us drivers even though the owners said we must take 100%," he said.

Transport minister Fikile Mbalula addressed a media briefing in Johannesburg on Monday. He said taxi owners were daring the law and challenging the authority of the state by disregarding regulations.

“We are going to war on things when we are not supposed to be going to war. There is no need to fight. I am not prepared to go to war over nothing.”

“We are scratching our heads every day (trying to find a solution). The taxi industry is not formalised and it will be very difficult for the industry to enjoy all the things that other business get to enjoy.”

He said the taxi industry was the backbone of the nation, and that government was in the process of discussing the formalisation of the industry.

Taxis in KwaZulu-Natal plan to operate at full capacity from Monday and long-distance taxis plan to operate without permits, according to Boy Zondi, ...
News
2 years ago

Law enforcement agencies currently have no plan on scuppering the taxi industry's move to disregard lockdown regulations by loading the maximum ...
News
2 years ago
Next Article