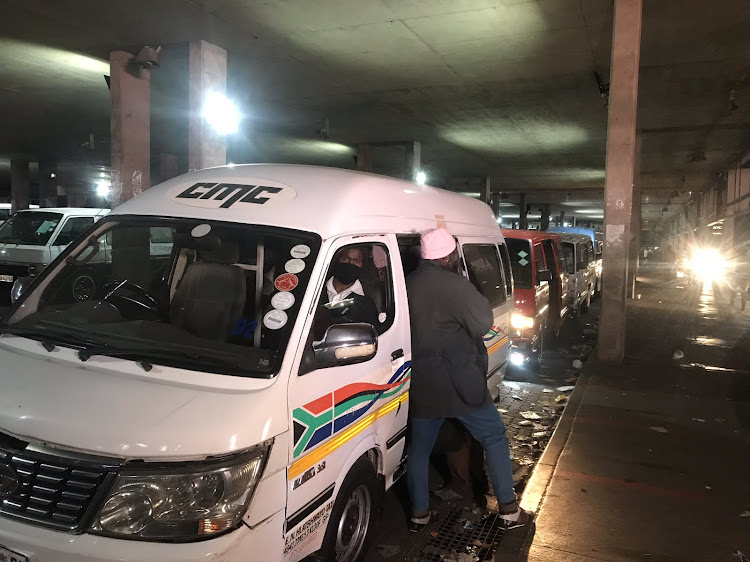 Law enforcement agencies currently have no plan on scuppering the taxi industry’s move to disregard lockdown regulations by loading the maximum capacity in taxis.

Johannesburg Metro Police Department spokesperson told Sowetan on Monday that they had not received directives to impound taxis that are violating lockdown regulations.

“We haven't received a notice to act as yet with regards to impounding taxis, but we may know at a later stage,” Minnaar said. He was speaking on the backdrop of the South African National Taxi Council (Santaco) announcement during a virtual briefing on Sunday after  it accused Transport Minister Fikile Mbalula of failing to take their concerns seriously.

Commuters at Bara Taxi Rank in Soweto said they faced a double edged sword regarding the taxi industry’s decision to do away with loading passengers at 70% capacity.

Nthabiseng Mokoena, who works in Southdale said she was happy that the taxi industry was taking matters into their hands.

“This means that they won't be striking anymore and they wont increase fares. Its understandable why taxi operators are doing what they are doing, they need to make money as well,” Mokoena said.

“I spend R42 a day on transport - from Mapetla (Soweto) to Bara, then I connect to Southdale. If the fares increase I will be poor because I will be working only for transport.” Mdu Mdlalose said passengers had no say in the war between the department of transport and the taxi industry, and that they are often collateral damage.

“There is nothing we can do. If taxis increase fares, we suffer. If government decides to stop taxi’s operations, we suffer. I can't afford to use any other mode of transport,” he said.

Melusi Mabaso, a taxi operator said it was too early to determine whether their stance in loading passengers was at capacity. “This is my first full load since the lockdown started so I don't know yet, but it will definitely make a difference at the end of the day. I’ll have a little more money to check in. It's also difficult because not everyone has returned to work and some people lost their jobs, so we’re also losing on that front,” he said.

Sowetan also visited the long distance rank. Lucas Mbokazi, a member of the United Taxi Association Front said they have not had their first load of passengers yet but that they intended on having a full load.

“It's too early right now but our taxis will be taking a full load from today,” he said Santaco's president Phillip Taaibosch said they were also demanding that all taxis that were impounded at the start of the lockdown be released.

Business as usual at ranks as taxis operate at full capacity

Commuters simply boarded taxis without any complaints as they departed to different destinations in Gauteng in full load capacity.
News
9 months ago

“We will not accept any form of impoundment. Operators will have no choice but to park all their taxis countrywide, until the impounded taxis are released, and we are allowed to continue with our work.”

Taaibosch added they would still adhere to health and safety regulations by wearing masks.

Last night Mbalula slammed Santaco’s announcement and said: “It is rather unfortunate and regrettable that the taxi industry leadership has elected to violate the law and forcefully load taxis at 100% capacity and undertake inter-provincial operations without the requisite permits, rather than await a decision on the matters they have tabled.”

He said law enforcement officers will work to enforce the 70% loading capacity for taxis.

“We condemn in the strongest possible terms any call encouraging taxi operators to violate provisions of the law and promote lawlessness. We remain committed to taking forward our engagements and encourage the industry to ensure that any form of protest they embark upon, is within the parameters of the law,” the statement added.