'Whatever happens, happens', say passengers travelling to other provinces in taxis 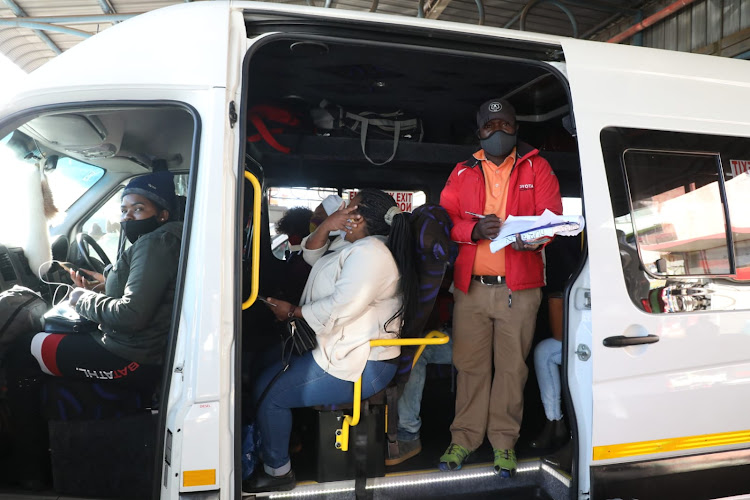 Passengers say they have no choice but to return home
Image: Thulani Mbele

“Whatever happens on our way, happens.”

This is the view of commuters who have boarded taxis from Johannesburg to other provinces as the industry begins travel without the government’s approval.

Wanderers taxi rank in the Johannesburg inner city was a buzz of activity on Monday morning as commuters seized the opportunity to travel to other provinces following the industry’s announcement. One of the commuters was Themba Zwane, who boarded a taxi to Pinetown, Durban.

Zwane is returning to work after working from home online.

“Whatever happens on our journey will happen. We will just see what will happen on the other side,” Zwane said.

Another commuter, Siyanda Mvelase, who was also returning to work in White River in Mpumalanga echoed the same sentiments.

“I came with my brother on Saturday, now I have to return to work. I absolutely have no choice, but to leave Gauteng. If police stop us, they will have to speak to the driver,” Mvelase said.

“If they do not want us to go to other provinces, they should come to the rank and stop taxis from leaving the province. They cannot stop us when we are already on our journey,” another passenger said.

The South African National Taxi Council and the National Taxi Alliance announced on Sunday that they would resume inter-provincial travel and load vehicles to full capacity after transport minister Fikile Mbalula postponed four meetings he was scheduled to have with the industry.

In these meetings, Mbalula was supposed to give feedback to the taxi industry on whether the government agrees to the request for opening inter-provincial travel and operating taxis at full capacity. Mbalula has previously indicated that he agrees with the taxi bosses on the two issues, but still needed to get a thumbs up from the National Command Council.

Mbalula’s office said that he was disappointed with the decision by the taxi industry as he is scheduled to meet the sector tomorrow. Police warned that they would enforce the law if anyone contravenes the national lockdown regulations. As the morning progressed on Monday, more people arrived at Wanderers taxi rank to board vehicles headed to various parts of the country.

One of the taxi owners, Thabo Gumede, said long-distance operators had incurred serious losses and the government seemed not to care.

“We chose to put our taxis on the road because we are hungry and Mbalula is giving us a runaround. We are tired. Banks want their money and have started repossessing taxis. We do not have an option now.

“My family has suffered. My children are suffering because taxis have not been working for three months. This is the only job that I know. I did not get a chance to go to school. I came here as a teenager…,” Gumede said.

Law enforcement agencies currently have no plan on scuppering the taxi industry's move to disregard lockdown regulations by loading the maximum ...
News
1 year ago
Next Article