Anger, shock as little Ansia is laid to rest 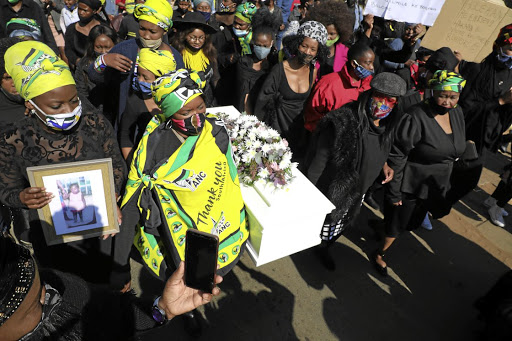 Little Ansia Kheha was laid to rest yesterday. The three-year-old was found dead in the veld in Orange Farm last week./ ANTONIO MUCHAVE/SOWETAN

The mother of three-year-old Ansia Kheha stared at her daughter's tiny coffin, oblivious to what was being said at the funeral service.

Johanna Nyanjani sat in the front row and was tightly held by Ansia's aunt Arminda Machel. She did not move.

Nyanjani looked numb, tired and barely cried throughout the service that took two and half hours. It was held at the Orange Farm Multipurpose Centre, south of Johannesburg.

The community of Orange Farm came out in large numbers yesterday to bid farewell to little Ansia who was found dead last Thursday at a dumping site in the area. She was covered in blood and had been stabbed.

She was found by a waste picker. No arrests have been made so far.

Family spokesperson Thatohatsi Olifant said the family was grateful to every member of the community who attended the service and ensured that Ansia received a dignified funeral.

"Her mother is still in shock and she is still trying to get into terms with her loss. It has been a very emotional moment," said Olifant.

She said men need to go back to being protectors.

The community of Orange Farm came out in numbers on Thursday morning to bid farewell to three-year-old Ansia Kheha whose lifeless body was found ...
News
1 year ago

Three-year-old Ansia Kheha was eating a meal at home just a few blocks away from where her mother was setting up a street stall, but she wandered off ...
News
1 year ago

"Men have become killers and we plead that they talk to each other so that they can go back to being our protectors and keepers," said Olifant.

She suggested that "more talks to the boy child" would help restore peace across communities and families.

"We don't wish any family to go through what we have been through. But, unfortunately the wound will not heal because we keep hearing of more kids and women being killed every day."

In the wake of Ansia's killing, the local municipality has embarked on an extensive grass cutting initiative to create safer spaces for children.

Members of the community stood around the coffin with candles lit in an emotional guard of honour during the service as they gave her a dignified send off.

Member of the Mayoral Council (MMC) for community development in the City of Johannesburg Margaret Arnolds said: "We need to deal with this. It is time to act against these brutal killings. Every day we pick up a body, a body here, a body in Cape Town, and a body there," she said.

Arnolds said the government was desperate to release criminals from jails because of the Covid-19 crisis which has raised concerns on the sudden rise of crime. Community member Mapule Lehasa said the widespread killing of women and children in the country has made her feel like she was taking part in a horror movie.

"I suddenly feel like I'm in a movie, waiting for this thing that has entered into individuals, making them kill each other, to come for me," she said.

Lehasa said she was scared of letting her children go to school because they might not come back home.

"I feel safer under the lockdown. I would rather be locked in the house with soldiers patrolling outside than go back to normality."