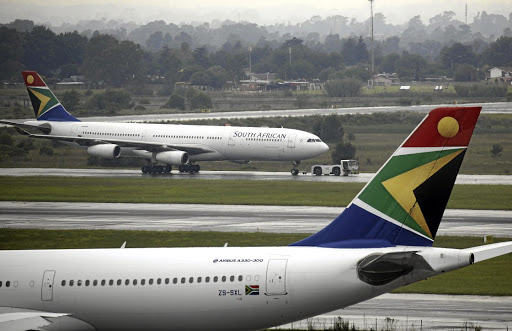 SAA creditors and employees will lose out if the airline is liquidated, says the department of public enterprises. /REUTERS /Rogan Ward

The department of public enterprises has urged creditors, employees and other stakeholders of SAA to vote in support of a business rescue plan for the airline.

The department, a shareholder of SAA, said this would result in a better return than a liquidation of the carrier.

"In addition, it is the only pathway for a rescue and restructuring of SAA," it said yesterday. The department made the call a day before SAA's business rescue practitioners are due to have a creditors' meeting today to vote on the business rescue plan.

A vote in favour of the plan by 75% of the voting interests is required to carry the vote.

The company was placed under business rescue in December. Business rescue allows for a financially distressed company to delay creditors' claims against it or its assets as a plan is put in place to rehabilitate it.

The department of public enterprises has urged creditors, employees and other stakeholders of SAA to vote in support of a business rescue plan for ...
News
1 year ago

The government says it has received unsolicited proposals from private sector funders, private equity investors and potential airline partners for a ...
News
1 year ago

The department said it believed the approval of the business rescue plan would help creditors and employees to be co-creators of a new airline and ensure a strong base was maintained for the growth of the local aviation industry.

It said should creditors vote not to support the business rescue plan, SAA would face liquidation. The department spelt out the disadvantages of the liquidation of the airline.

They included creditors receiving substantially less for debts owed to them by SAA and less severance benefits to retrenched employees, regardless of years of service.

It said should SAA be liquidated, every employee, no matter the number of years spent at the airline, would receive only a capped severance settlement of R32,000 and lose all other benefits.

"On the other hand, a restructuring process would offer severance and retirement packages based on years of service, the opportunity to re-employ skills for displaced employees in the future and opportunities to start their own businesses as service providers for a new airline."

The department said the finalisation of the business rescue plan and emergence of a new airline would allow unions and other key stakeholders to be co-creators of a new airline, as well as coming up with novel ways of addressing the interest of displaced workers.