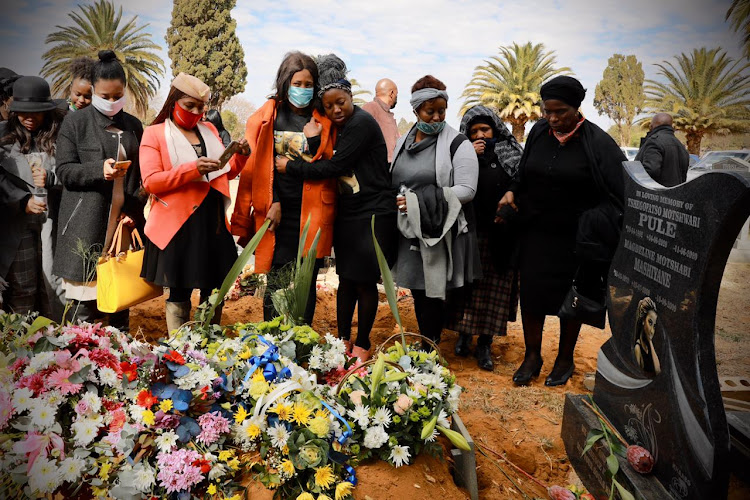 Emotions ran high at the Dobsonville cemetery on Thursday as family members and mourners bid farewell to Tshegofatso Pule, 28, who was murdered while eight months pregnant.

Family members sobbed uncontrollably as Pule’s casket was lowered into the ground.

One woman, who sat on the ground at the cemetery, cried hysterically before being hugged by another family member. Others clutched tissues as they wiped their tears.

The mood at the cemetery was sombre.

Pink and white balloons were released in memory of Pule, whose body was found hanging from a tree in the veld in Durban Deep in Roodepoort on Monday. She had a stab wound to the chest. Her unborn daughter did not survive.

Earlier at the family home in Meadowlands, Soweto, police tried their best to limit those attending the service to 50 people, in line with Covid-19 regulations. Police and soldiers barricaded the vicinity.

Pule's sister, Mimi, was crippled in pain as she recalled a candid memory of her sister - whom she described as her everything. They had lost their parents at a young age.

“Early this year I was diagnosed with depression. When Tshego came, she [jokingly] asked me if I am crazy or if I was told that I am crazy. I asked her, what do you mean, and she said, 'learn to forgive'.

“Yes, mom and dad left us but you need to learn to forgive, let go.”

She recalled how Tshego assured her that she would never leave her.

“She said, I will be always there for you. I am going to Grace Bible Church and I will pray for you, you are going to find peace in your heart,” Mimi said of Tshego's words to her.

Balloons with an image of Tshegofatso Pule were released into the sky during a funeral service for her in Meadowlands, Soweto.
Image: Sebabatso Mosamo/Sunday Times

Tshepiso Tsita, a childhood friend of Pule's, said while she was heartbroken, she wanted to urge mourners not only to remember the manner in which she died but how she lived.

“Tshego would really be proud of the way that everyone has been there for each other [since her death] and are pulling together, united in support.

“It goes to show that we all carry a little bit of Tshego inside ourselves. If we are looking for something positive to come out of something this painful, it is that new friendships will be formed and Tshego would love that.”

“Nothing was more important than those close to her. So, let's keep close to each other and do what she would have wanted. She would want us to be happy, laughter always got her through all the hard times, and laughter will get us through ours.”

Some of her most-used phrases were: “Don’t forget to laugh, stop crying softie ...” recalled Tsita.

Pule worked as a make-up artist at a MAC cosmetics store and wanted to pursue a career in marketing.

Her parents, Lungi and Makina Mashiane, both died when she was much younger. Her aunt, Priscilla Giwu, took her in when her mother died 11 years ago.

Pule has two brothers and a sister.

Speaking at the family home, Pule’s uncle, who was the defence attorney for convicted murderer Sandile Mantsoe, pledged to never again represent those who rape, kill and molest women and children.

“Tshego is Karabo Mokoena today. I now know how it feels. I now know what the family of Karabo went through.

“Yes, I did my job, but now I know what it feels like for the family,” Tumisang Katake said.

A close friend of Pule, Thato Manye, said at the cemetery that they grew up in the same neighbourhood.

“She was a very loving person and was always happy. She was a fashionista and knew how to dress.

“At first I couldn’t believe that she passed away, but as time went by I had to make peace with it. Even now it’s still hard to believe”

Another friend, Lungile Vezi, described her as a bubbly and caring person, who went “above and beyond” for those close to her.

“She was always helpful and went out of her way for people. You wouldn’t struggle if she was around.

“I always told her if she ever needed something I would be there for her and I know she would have done the same for me. She knew how I felt about her.”

The heartbroken family of Tshegofatso Pule say they want to dedicate the day of her funeral not only to bid farewell to her but to call for an end to ...
News
2 years ago

Among those in attendance at the funeral were EFF MP Mbuyiseni Ndlozi, who said Pule did not deserve to die in the manner that she did.

Ndlozi asked the Soweto community to support the Pule family, even though Covid-19 made it difficult for people to be with them in person.

“This is not an ordinary death, it’s a tragic death. The family should not have to mourn alone, so wherever you are, stand outside your home and salute the hearse as it passes.”

Ndlozi blasted police for not being there for Pule at a time “when she needed them the most”.

“Police are here in numbers, they have come to make sure that we stay one metre away from one another, but where were they when Tshego needed them the most?

“They are here with their guns and the military is here, but we don’t need them when we mourn, we need them to stop the mourning.”

Ndlozi said those who kill “our sisters” are cowards.