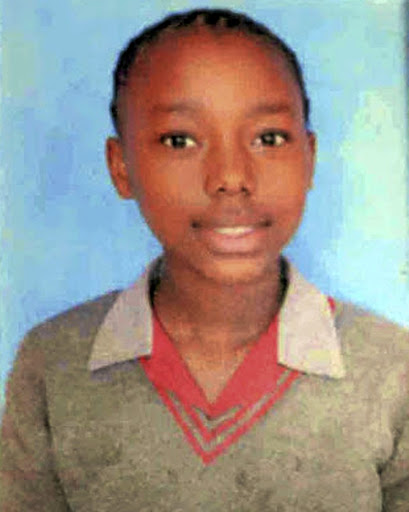 A 17-year-old boy accused of murdering Soweto teen Siphiwe Sibeko is expected to hear his fate on a bail application on Thursday.

The teen, who cannot be named because he is a minor, appeared in the Protea magistrate's court yesterday where the matter was rolled over to today for a decision. He is facing charges of murder and rape after he and his 22-year-old co-accused were fingered in the murder of Siphiwe.

Siphiwe's mutilated body was found dumped in a veld in Emndeni in April after she had gone missing for two days.

In his affidavit, the boy previously told the court that he was not in Soweto on the weekend Siphiwe was murdered.

He told the court he heard about Siphiwe's murder after his classmate sent him a post which had Siphiwe's picture on it with the words "RIP".

A man has allegedly confessed to murdering Soweto schoolgirl Siphiwe Sibeko whose body was found mutilated and dumped in a veld.
News
1 year ago

"My classmate asked me if I knew about what happened to Siphiwe and I told her I didn't. I showed my mother the message because I was traumatised and shocked and didn't know what to do," he said.

The boy told the court he could not have been in Emndeni because there was no public transport due to the national lockdown.

He said he and Siphiwe had been dating for three months at the time and was shocked when he was arrested.

He alleged that he was assaulted and driven around by the officers who arrested him on April 8.

"The police officers placed a plastic bag over my head repeatedly, for a period of about three minutes, [at a time]. They assaulted me and said the other accused said I was responsible for the murder. I didn't know what they were talking about and they said I killed the girl."

Siphiwe's mother, Nandi Sibeko, told Sowetan that she hoped the accused would be denied bail. "We don't want him to get bail because of what he has [allegedly] done.

"We know he is young, but he can't be out in the streets while we are still mourning my daughter's death."

A source close to the police investigation previously told Sowetan the teen's co-accused, in his statement, said the 17-year-old came up with the plan to rape the girl.

The man said on the day Siphiwe was last seen alive they waited for her because she was dating his co-accused and had made plans to meet in Dobsonville.

He said they had not planned on murdering the teen until they were with her in a veld in Emndeni.

"[The boy] then convinced me to help him rape her. I took out a knife and held her feet then he forced himself on her. She fought back and resisted, so I stabbed her on the neck and legs several times while [the boy] strangled her."

He said they had a struggle but managed to subdue her before they took turns in raping her and discarding her body.

A 22-year-old man has been arrested for the murder of the 14-year-old girl whose body was found dumped in Soweto.
News
1 year ago

Teen raped, slain and mutilated
News
1 year ago
Next Article