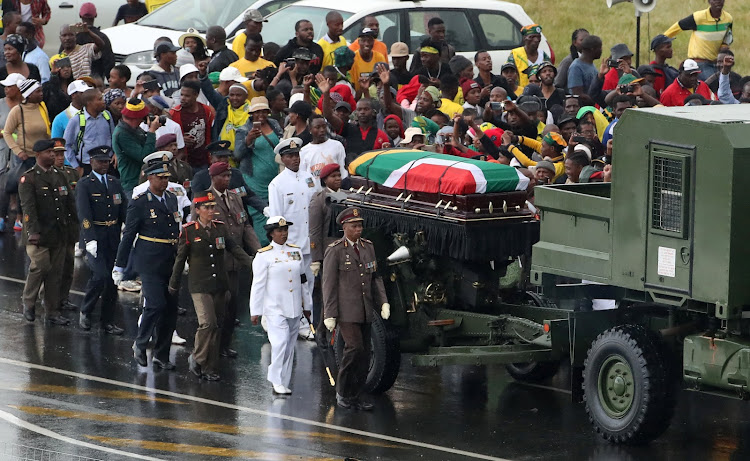 The government spent over R105m burying 15 high-profile South Africans between February 2018 and February this year.

Of that amount, R25m was on deviations due to procurement shortcomings.

She revealed that R105.6m had been spent on 15 official funerals over the two years.

The largest amount was R35.7m spent on the April 2018 funeral of anti-apartheid struggle stalwart Winnie Madikizela-Mandela.

De Lille's response also shows that almost half of the amount spent on Madikizela-Mandela's funeral - R16.8m - was "deviations".

Appearing before the standing committee on public accounts in March, De Lille told MPs that the public works and infrastructure minister director-general Sam Vukela was implicated in the awarding of fraudulent contracts for state funerals.

The auditor-general had raised concerns about fraudulent contracts in the 2018/19 annual report where prices were inflated and payment irregularities found for Madikizela-Mandela, Skweyiya and Modise's state-sponsored funerals. The three funerals cost taxpayers a whopping R76m, with the department spending, among other amounts:

Vukela, according to De Lille, was one of the officials who have been implicated in a forensic investigation report by PricewaterhouseCoopers (PwC) on the fraudulent contract management.

Despite a 40km fence being erected along the border at a cost of R37m in April, Zimbabwean smugglers still regularly cross the border.
News
1 year ago

Vukela denied any wrongdoing adding that he was not even aware he was implicated in the report.

At the same meeting, the deputy director-general responsible for governance and risk, Imtiaz Fazel, told MPs that the procurement processes for those three official funerals were fundamentally flawed and that created a platform for “major” transgressions.

He said the overpayment by the department was due to officials approving invoices without applying the necessary application to ensure they were valid and accurate. It resulted in fruitless and irregular expenditure.

He said an investigation by PwC found this happened due to negligence on the part of individuals and management involved in overseeing the funerals in question.

Fazel said there was concealment of further commissions in the invoices which were not detected and inflation of invoices by at least 15% beyond the invoice price. The investigation found this was due to negligence by the officials concerned.

De Lille told MPs she was recommending to minister in the presidency Jackson Mthembu that state and official funeral costs be capped.

In her question, Van Minnen also wanted to know about the measures and guidelines that De Lille and Mthembu had put in place to prevent financial mismanagement and fraud regarding these funerals and details of the expenditure limits.

In her response, De Lille said work was still in progress to finalise such measures and guidelines. She said once the guidelines are completed, they will be presented to the cabinet for consideration before they are implemented.

Public works minister Patricia de Lille has asked for an investigation into a controversial border project commissioned by her own department.
News
1 year ago
Next Article