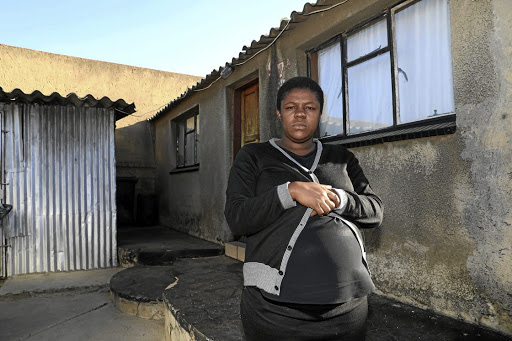 A heavily pregnant Soweto woman relived her "nightmare" at a local hospital where she says she was treated with disdain and denied food for three days in isolation because she displayed symptoms of Covid-19.

Kgopotso Hlatshwayo is also heartbroken about the humiliation she was subjected to by her community, who suspected that she tested positive to the deadly coronavirus.

Hlatshwayo was admitted at Bheki Mlangeni District Hospital in Jabulani, Soweto, on April 22 for dizziness and fatigue due to pregnancy.

The 32-year-old mother of one said nurses deprived her of food, and she could not receive food from her family as they were denied entry to her ward.

Hlatshwayo, who is eight months pregnant, said her nightmare began when she started to display Covid-19-like symptoms.

"No-one [at the hospital] wanted to do anything with me," she told Sowetan yesterday.

"They were convinced that I'm coronavirus positive when I started to struggle to breath and sneezed a lot. This is because I have a history of sinusitis."

Hlatshwayo's family took her to the hospital when she became dizzy.

"I'm heavily pregnant, so I was feeling dizzy and weak at the same time.

"So, my family took me to this hospital not knowing that my stay there would be nothing but a nightmare," Hlatshwayo said.

After she displayed symptoms deemed similar to those of the deadly Covid-19 she was moved to an isolation ward on April 28 and a doctor suggested that she should be tested.

A shortage of specialised nurses has meant that Tygerberg Hospital in Cape Town is only able to run 25 of its 42 ICU beds, while a shortage of ...
News
1 year ago

She said nurses treated her like a leper in self-isolation.

"No-one wanted to do anything with me because they feared that they would contract Covid-19 if they came close to me.

"So, I was deprived of food because no-one wanted to come close to me. This happened for three-long days.

"It was very disheartening to see other patients through the glass door receiving food but not me.

"At the beginning I thought they were serving patients in the other ward first and that I would be the last.

"I finished my isolation without food. But from the evening of April 28, the day I was moved to the isolation ward, I didn't get food.

"I felt powerless as I was shouted at and told to go lie still in bed. I was treated like a child. I heard them shouting that I wanted to infect the whole hospital with my deadly disease; that tore me inside."

Hlatshwayo's sister, Duduzile Mathebula, said they were pained when they got a call from her crying of hunger and being ill-treated at the hospital.

"We cooked food but we were turned away more than three times and told that no visitors or food from outside was allowed," Mathebula said.

She said talking to her on the phone made them powerless as she sobbed for food for two days.

Mathebula also said the family was distressed by the presence of police at their house.

"There were a lot of police and metro police vehicles and paramedics dressed in high-protective gear looking for my sister. They said she escaped from hospital and that she contracted Covid-19."

Mathebula said when her sister arrived home she was further victimised by people in the neighbourhood who swore at her, accusing her of bringing diseases to the area.

"My sister was not even allowed to get to the house. She was forced into the ambulance and she was forcefully driven back to the hospital."

Mathebula added that her sister was victimised again when she arrived at the hospital gates, when nurses cursed and called her names.

She said this happened despite Hlatshwayo's tests results coming back negative. They later told her to let bygones be bygones and stop stressing for the sake of her unborn baby.

"The clinical manager at the hospital blatantly told her to 'drop the whole drama' because she was still going to need to use the same hospital to deliver her child. That was a clear threat and intimidation."

A neighbour, who did not want her name to be mentioned, said she and other residents still found it difficult to accept Hlatshwayo back to the community because they suspected she had contracted the deadly virus.

Another neighbour, Zwelihle Nhlapho, described how Hlatshwayo was manhandled by the police: "One metro police grabbed her by her wrist after she tried to explain herself. I did not hear what she was saying to the officer.

Gauteng department of health spokesperson Kwara Kekana said staff members at the hospital went through Covid-19 training and that they were expected to be able to handle coronavirus patients. She said Hlatshwayo's complaint was addressed at the redress meeting at the hospital on May 22 with the staff.

Hlatshwayo is not chuffed - she wants to sue the hospital.

'Emotionally it can kill one's spirit': policeman on the Covid-19 front line

A Western Cape police officer, who survived being shot at several times back in 2016, is now fighting the battle of Covid-19
News
1 year ago

'We survived Covid-19' - messages of hope from some who recovered

A nurse died at Cecilia Makiwane Hospital in East London on Friday morning, bringing to three the number of health workers who have succumbed to ...
News
1 year ago
Next Article