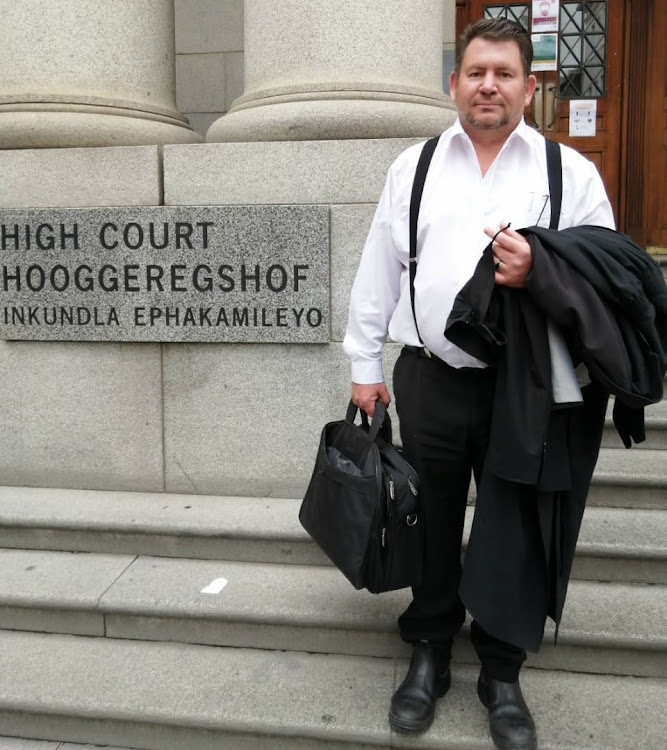 Lawyer Carlo Viljoen is championing the cause of the country's hairdressers in the Western Cape High Court.
Image: Aron Hyman

Many a South African has reached a breaking point during the national lockdown which started two months ago. Criminal law advocate Carlo Viljoen’s came when his wife decided to cut her own hair.

Now he is leading a one-man David vs Goliath battle in the Western Cape High Court against the national government’s ban on hairdressers and salons.

On Wednesday he told the court that he was acting in his private capacity when he brought an urgent application for the court to scrap the ban on the hairdressing and salon industry.

Sporting a haircut done by his wife, Viljoen said he has wide support in the industry. He said he had received support in the form of e-mails from 159 hairstylists from around the country, many of whom were single mothers living from hand to mouth.

He has also been working with a hairdressers’ support group, who he said have received 592 requests from hairdressers requesting food relief after lockdown restrictions banned them from doing business.

The judge in the matter agreed with him that there was a prima facie basis for the case on the fundamental right to earn a living.

Legal challenges against the government are mounting.
News
2 years ago

But his argument ran into several difficulties, including confusion about which minister needed to be sited as a respondent in the matter. The health minister’s defence counsel Adiel Nacerodien argued that he should rather have cited minister of cooperative governance and traditional affairs Nkosazana Dlamini-Zuma, as she was responsible for creating the regulations.

Viljoen also argued that the cost of the ban - on what he claimed was a R250bn per annum industry - was greater than the potential cost of risking Covid-19 infections. While 1.5% of the population could die of Covid-19, he said deaths related to poverty resulting from the ban would be much higher.

Bozalek said if he ordered the opening of salons based on current Covid-19 infections and the infection rate mushroomed in three weeks’ time, he would have no way to reverse his decision.

“The effect of my interdict will be to declare regulations for hairstylists null and void,” he said, adding that what Viljoen was really asking for fell in the realm of a final relief, which is a much more stringent process.

“You’re asking me to extend an order into the future. In three weeks’ time, when infections have mushroomed, I can’t reverse my order,” said Bozalek.

This is why we banned cigarette sales: Nkosazana Dlamini-Zuma tells court

The overarching rationale behind temporarily banning the sale of tobacco products during level 4 of the lockdown was to protect human life and health ...
News
2 years ago

He also said that his order would amount to trumping the government’s decision making on how to govern the crisis.

“Government is advised by experts and they make their choices based on those recommendations. Who’s to say their call is wrong and mine is right?” he asked Viljoen.

Viljoen closed his arguments by saying that hairdressers were being caused irreversible harm by the national lockdown.

He said their three years of training included extensive training on health and safety, which would help hairdressers mitigate the risks of infection in their shops.

After the case was heard, Viljoen told TimesLIVE that he realised the plight of hairdressers when his wife decided to cut her own hair during the lockdown. He asked her friends whether there was a way to get their hair cut professionally and they all gave him the same answer.

“It was tears and grief to hear what they were going through. These women [the hairdressers] can’t eat. The state is busy with overkill,” he said.

“What about all of the restaurants and all of the other industries? It’s not like the virus is going to go away,” he said, lamenting how long the lockdown could last.

He said the haircut his wife gave herself was decent enough for him to trust her to take the scissors to his head as well.

He added that as a lawyer he has also run out of work during the lockdown, with most of his cases being postponed.

“I do a lot of pro-bono human rights cases, but I pay the bills doing criminal law,” he said.

Judgment in the matter will be handed down at 3pm on Thursday.

Ofentse Monaledi, a security guard, left home on the morning of April 2 to confront his employer over non-payment.
News
2 years ago

The decision by the government to continue the ban on the sale of cigarettes and tobacco products has been met with anger from the tobacco industry.
News
2 years ago
Next Article