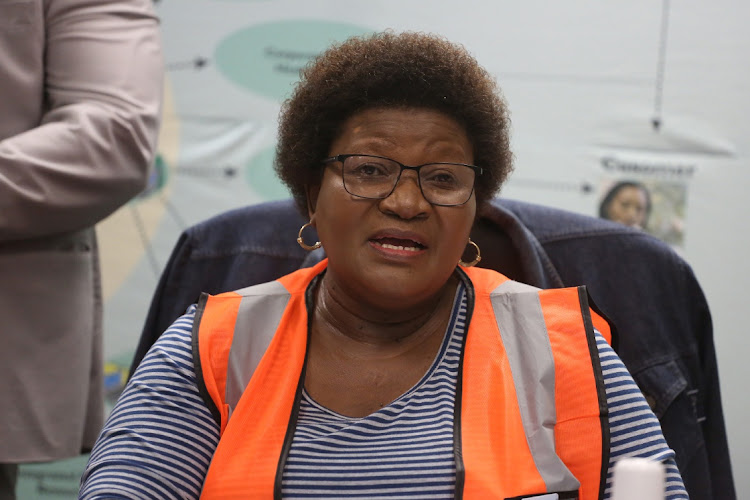 Eastern Cape health MEC Sindiswa Gomba lamented the 'many people with Covid-19 coming to the Eastern Cape'. But the Western Cape shot back that she was building a Berlin Wall between provinces.
Image: MARK ANDREWS

Eighty people travelling to the Eastern Cape from the Western Cape have tested positive for Covid-19.

This was 24 more than the figure released earlier in the day, according to the Eastern Cape health department which on Thursday night revealed the updated totals, reports DispatchLIVE.

The people entered Eastern Province through Tsitsikamma and Aberdeen.

“We hope that the number of people testing positive will not continue going up,” department spokesperson Sizwe Kupelo said, adding that 2,090 people were tested on the borders between the two provinces and 29,516 people were screened.

He said that 9,524 people had been recorded entering Eastern Province in addition to the 78 who had travelled from Cape Town and were intercepted in Elliotdale.

Another 110 people were quarantined in Mpekweni and Fish River in Port Alfred. They had also travelled from Cape Town.

Eastern Cape health MEC Sindiswa Gomba said: “We will not be deterred or derailed as we are committed to flattening the infection curve in the province. This needs all of us to work together so that we beat this virus. This virus only moves when people move so it's up to all of us to contain it.”

She said: “We understand that interprovincial travelling is allowed but having so many people who have tested positive for Covid-19 coming to the Eastern Cape undermines the good work that we have been doing and continue doing.

“Why the ...[Covid-19 positive] people were not tested in the Western Cape is beyond me. We need all provinces to work together in containing the spread of this virus,” she said.

But Western Cape transport MEC and DA provincial leader Bonginkosi Madikizela lashed out at the Eastern Cape government on Facebook, accusing it of “building a Berlin Wall” between the provinces and questioning why commuters from the Western Cape were targeted for testing. 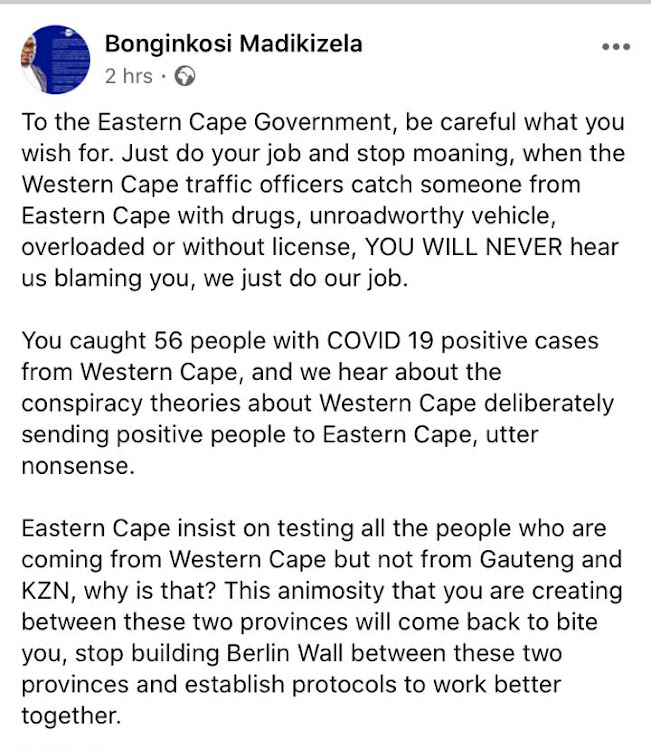 He said the Western Cape government had stayed silent when drivers from the Eastern Cape had been caught with drugs, in unroadworthy or overloaded vehicles, or without licenses.

“To the Eastern Cape Government, be careful what you wish for. Just do your job and stop moaning, when the Western Cape traffic officers catch someone from Eastern Cape with drugs, unroadworthy vehicle, overloaded or without licence, YOU WILL NEVER hear us blaming you, we just do our job.

“You caught 56 people with Covid-19 positive cases from Western Cape, and we hear about the conspiracy theories about Western Cape deliberately sending positive people to Eastern Cape, utter nonsense.

“Eastern Cape insist on testing all the people who are coming from Western Cape but not from Gauteng and KZN. Why is that?

Empowering yourself with accurate information on the coronavirus (COVID-19) is very important to your health and wellbeing.
SebenzaLIVE
2 years ago

Limpopo has recorded its third Covid-19 death in 41 cases.
News
2 years ago

For-sale signs could be up at first division side Tshakhuma Tsha Madzivhandila (TTM) due to the Covid-19 pandemic.
Sport
2 years ago
Next Article