Lockdown eases but not for alcohol 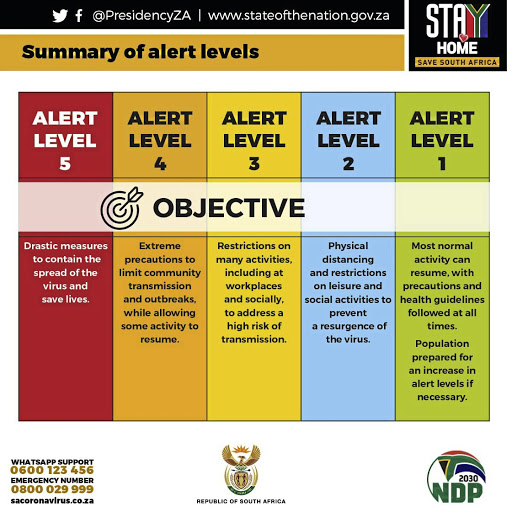 President Cyril Ramaphosa has announced the easing of lockdown restrictions from next month as SA prepares to resume some activities which had been barred for five weeks.

Addressing the nation from Pretoria last night, Ramaphosa said scientists have advised that an abrupt and uncontrolled lifting of restrictions could cause a "massive resurgence in infections".

"We cannot take action today that we will deeply regret tomorrow, we must avoid a rushed reopening that could risk a spread which would need to be followed by another hard lockdown," Ramaphosa said.

He said the state of the coronavirus pandemic in the country would, going forward, be classified using alert level 1 to level 5, with the latter level requiring a full national lockdown.

Ramaphosa said the government had been decided to start ending the lockdown in phases from Thursday, April ...
News
1 year ago

"This means that some activity will be allowed to resume subject to extreme precautions to limit community transmission and outbreak," the president said.

He added: "Some businesses will be allowed to resume operations under specific conditions... every business will have to adhere to detailed health and safety protocols to protect their employees, and workplace plans will be put in place to enable disease surveillance and prevent the spread of infection."

He said industries would be classified using these levels, however, ministers would be unpacking this to the public.

He announced that public transport would be allowed to operate from next month, however, all passengers would be required to wear face masks and be sanitised.

He also said although shebeens and bars would remain closed, the sale of cigarettes would be allowed.

Ramaphosa said no travel will be allowed between provinces, except for the transportation of goods and exceptional circumstances such as funerals.

He said the range of goods that may be sold will be extended to incorporate certain additional categories, however, these will be detailed by the relevant ministers.

"It is important to note that several restrictions will remain in place regardless of the level of alert for as long as the risk of transmission is present; bars and shebeens will remain closed," he said.

Ramaphosa said the country's borders would remain closed expect for the repatriation of South Africans into the country or to allow foreigners to return to their countries.

He said all gatherings, including sport activities, religious gatherings and concerts would remain barred.

"All businesses that are permitted to resume operations will be required to do so in a phased manner, first preparing the workplace for a return to operations, followed by the return of the workforce in batches of no more than one third."

"As we slowly ease the lockdown restrictions, we are substantially and rapidly increasing our public health response."