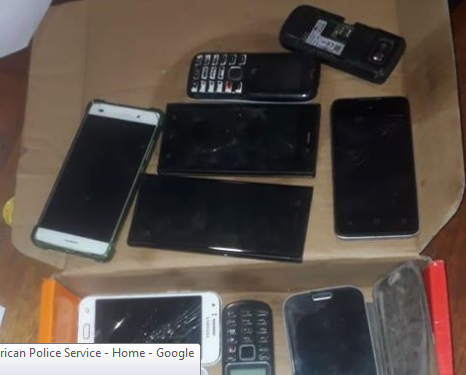 Some of the stolen items that were recovered by police.
Image: Supplied

Members of the police National Intervention Unit in the Western Cape arrested five suspected robbers during an intelligence-driven operation in Philippi East and Mfuleni  on Friday night.

According to police, four of the suspects were being sought for armed robberies and the fifth suspect was found with suspected stolen goods.

“This operation led to the arrest of a 26-year-old suspect in Philippi East for the possession of an unlicensed .45 calibre firearm, 12 cellular telephones, 9 car keys, 2 notepads, and 3 laptops, all suspected to be stolen during robberies.

“The operation further landed four suspects aged between 21 and 32 between bars. They are sought for armed robberies perpetrated in Philippi East and Mfuleni,” police said.

They added that five suspects were being detained until their court appearances on Tuesday.

Police have confirmed that an 80-year-old pensioner - a former police officer - was killed during a cash paypoint robbery in the Free State.
News
1 year ago

One person was shot dead during a shoot-out with police outside a mall in Westville, Durban
News
1 year ago

Criminals have taken advantage of load-shedding to carry out a robbery at a frail care centre in Port Elizabeth, Eastern Cape police said.
News
1 year ago
Next Article