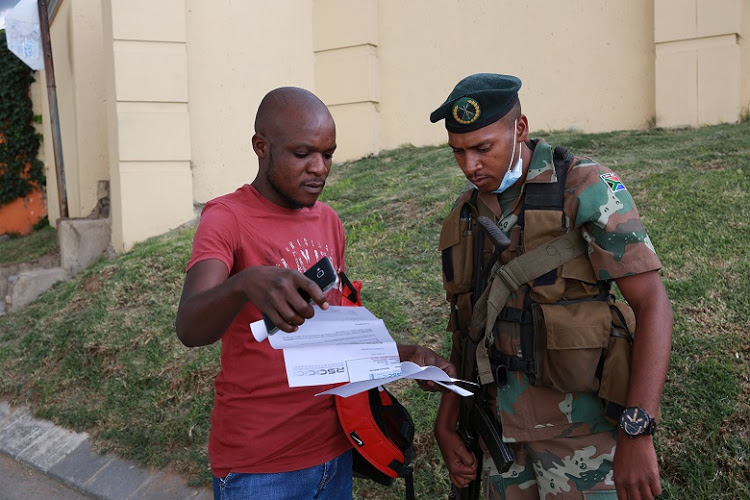 A SANDF officer checks the permits of an essential worker
Image: Thapelo Morebudi

Minister of defence Nosiviwe Mapisa-Nqakula has cautioned members of the South African National Defence Force (SANDF) against their heavy-handedness during the lockdown.

A lot of videos, as well as complaints, have emerged that the military and members of the SA Police Service have been using excessive force and violence against South Africans.

They were accused of hitting people, making them do push-ups and frog jumps, among others.

Mapisa-Nqakula said that they should refrain from using any kind of force - even if they are provoked.

SANDF enforcing some much needed discipline in our society 😂😂😂#SaluteToFrontLineSoldiers
Kudos to SANDF 😂 #LockdownSA#lockdown#Covid19inSA pic.twitter.com/vbWxpaBtE7

Police on Sunday shot down any suggestion that cigarettes would be allowed to be sold during the lockdown.
News
2 years ago

“The minister wishes to strongly reiterate the message delivered by the commander-in-chief of the SANDF to the deployed soldiers to desist from using excessive force against citizens of the country, regardless of the level of provocation they may face whilst deployed,” department of defence spokesperson Siphiwe Dlamini said in a statement.

“The minister has since instructed the chief of defence to monitor the situation on the ground and deal with those members who are proven to have used excessive or unnecessary force against citizens.”

Video not verified: NO emergency or disaster regulations allow for this! @SAPoliceService @_SANDF_ pic.twitter.com/K1sYusybpc

Soldiers on foot were out in full force in parts of Alexandra township, north of Johannesburg, on day 1 of the 21-day coronavirus lockdown on Friday.
News
2 years ago

In deploying the military last week Thursday, their commander-in-chief President Cyril Ramaphosa urged them to not “skop and donder” citizens.

He said that they should be so nice that South Africans should even want to give them flowers.

“This is not a moment for skop and donner.  This is a moment to be supportive to our people. When they see you patrol with your guns, they will be fearful but make sure that when they see you they see kindness of the state of South Africa. They should even get to a point where they may want to give you roses,” Ramaphosa said.

This is not enforcing regulations anymore, it's simply brutality. Why SANDF ? #Covid19inSA pic.twitter.com/1WpPflzN42