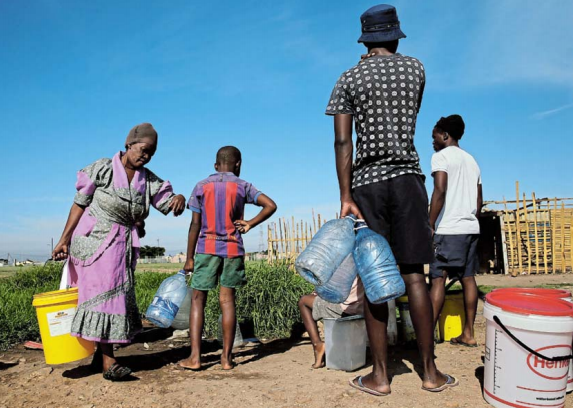 Residents of the Nomakanjani informal settlement queue to use a communal tap
Image: Werner Hills

Two thousand shacks, only “one working tap” — and now lockdown.

That is the reality for those living in Port Elizabeth’s Nomakanjani informal settlement.

Though the large community has eight taps —too few even if they are all working — only one is said to be functional, meaning residents have to queue, sometimes for hours, to fill their water bottles and buckets.

As SA moves closer towards a national lockdown at midnight on Thursday in an attempt to contain the spread of coronavirus, residents in Nomakanjani are wondering how they will cope, reports HeraldLIVE.

Walking around the area, a densely packed settlement in Motherwell, children are seen peeking through front doors, usually the only way to access the one or two-room shacks.

As they peer out at  passers-by, sweat beads form  on their upper lips on a warm day in the city.

Standing at a working tap, a woman manages to gather enough water to do her laundry and wash her blankets.

Standing with her hand on her hip, she said she does not know how the community will be able to function during the l ockdown.

“What does this mean? Are we not going to be able to fetch water because we’re being told to stay indoors?” asked the woman, who did not want to be named.

Nomakanjani community leader Vuyani Lloyd said he was extremely concerned about the possibility of Covid-19 hitting the metro and infecting the settlement’s residents.

“We have about 4,500 people living in Nomakanjani and we share eight taps.

“At some of those taps, water is only trickling out and more pressure is needed.

“The lockdown the government is implementing is putting pressure on us because we’re living on top of each other in a highly congested area, so we don’t know what do to.

“As people living in informal settlements it’s going to be very difficult for us because we want to comply and follow what government is saying, but we have children and it’s very hot in those shacks.

“Some of us don’t even have yards for the children to play in,” Lloyd said.

On Monday night, President Cyril Ramaphosa announced that SA would go into lockdown for three weeks, until April 16. He said the national command team on the coronavirus determined this was a necessary step to contain the spread of the global pandemic.

By Wednesday morning, the number of confirmed cases of Covid-19 in the country was  709.

Globally, more than 450,00 people were infected by Wednesday with more than 20,000 deaths.

Another resident of Nomakanjani, Siphokazi Hlalu, said government officials spoke a lot about hygiene and the need for people to keep their hands clean.

“For one, we don’t have water to wash our hands. We don’t have sanitisers to clean the spaces around us and when we have to relieve ourselves, there are only five toilets to share among 4,000 people. It’s not possible,” she said.

Hlalu said people have resorted to digging long-drops rather than using the communal toilets, which were a conduit for infections.

Mkhulu Jeyi says his main concern about the lockdown is that residents might be left without electricity and water.

“The toilets we have here are not sufficient for the people here. Refuse collection is non-existent. Those affected most will be us.

“Water is the main issue because it’s the one thing that causes us to leave our homes.

“It’s not enough for the government to tell people to stay in their houses and not leave.

“What is the government doing for people living in shacks, like us?"

“This is a huge concern for us as it has the potential to be a disaster, because should one person be infected, we’ll all catch it because of how we live.

“We have not been catered for, nor has government taken our needs into account,” Jeyi said.

Sitting inside her shack, domestic worker Nontombi Klaas said she is worried about how she will make ends meet.

“We’re going to go hungry during this 21-day period because it’s no work, no pay for me.

“I’ve got one child and it’s hot inside this shack.

“We’re scared to leave the house ever since this virus broke out.

“This morning, I went to fetch water and had to wait for three hours before it was my turn,” Klaas said.

“We’re also installing bush facilities in the form of chemical toilets and electrical contractors are continuing the work of electrifying the areas that don’t have electricity.

Lungisa said in line with the municipality’s decision, chemical toilets are a permanent solution and will continue to be installed throughout the year.

He said the city’s public health department is also working on ensuring that residents in informal settlements stay safe by distributing hand sanitisers to needy communities.