Second Covid-19 case in Eastern Cape: province 'baffled' at how tourist was allowed to travel 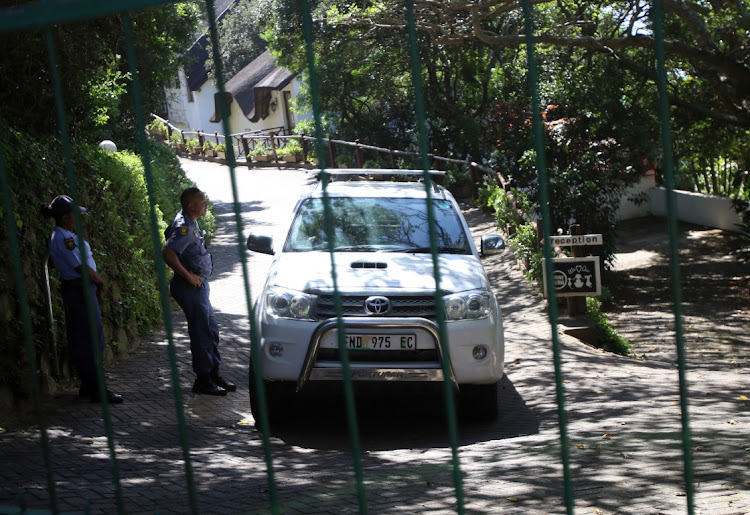 Police control access to Crawford's Beach Lodge in Chintsa after a German tourist who stayed at the resort tested positive for the coronavirus.
Image: MICHAEL PINYANA

The Eastern Cape government is implementing stringent measures to prevent tourists spreading coronavirus in the province.

This comes after a German tourist, who is part of a tour group at Chintsa's Crawford's Beach Lodge, tested positive for the virus, reports DispatchLIVE.

The group arrived at the resort on Friday night. On Saturday night, the infected tourist received a call to say he had tested positive for the virus.

The provincial health department is “baffled” at how the tourist was allowed to travel, as he had reported symptoms in KwaZulu-Natal.

The man is in isolation in his room at the resort, according to its owner, Mark Crawford.

The remainder of the 11-member tour group and four South African guests are in isolation there.

“Tour guides did some translation for them. They would have been in contact with some of our employees for a bit ... but not major contact,” Crawford said.

They became aware of the case after the tourists informed them, he said.

“The department of health took over and controlled everything. They have given people educational pamphlets and instructions. We did offer the lodge as a place for high-risk employees to be quarantined, but the health department said they could go home and be in isolation.

“We know each person was treated differently according to their department and exposure. They have been given a checklist to monitor their health at home,” Crawford said​.

Mabuyane told DispatchLIVE that from Monday screening would be ramped up at entry points to the province, with health workers working in conjunction with the police.

Provincial authorities would also keep a close eye on tourists in the province. The provincial government was establishing who these individuals were.

“We need to detect any problems early enough. As from tomorrow (Monday) police will be in full swing working with health officials,” the premier said.

Mabuyane said he discussed the German tourist's situation with the German ambassador to SA.

“We agreed with the German ambassador that we acted correctly ... we acted within the World Health Organisation norms and standards. Where these cases are mushrooming, let's isolate, quarantine and treat,” he added.

He said he had been informed that employees at the resort were released after the case was reported.

He was not sure whether they had been in contact with the tourists.

Gomba said she did not know why the tourist, who had left Pietermaritzburg, where he was tested, had been allowed to travel, as he had been showing flu-like symptoms.

“What we know is that the tour group travelled to KwaZulu-Natal and happened to be in Pietermaritzburg. We are informed that the patient did have some complications and tests were done. But how the patient was allowed to travel again still baffles us,” she said.

Gomba said the patient should have waited 48 hours for the results before travelling further.

“If a person takes a test, that person must be isolated waiting for those results. We are finding it strange that the tourist was allowed to travel ... we were informed they were going to Tsitsikamma. There could be many of them infected,” she said.

DispatchLIVE visited Chintsa early on Sunday. A police vehicle with two officers was stationed at the lodge's gates, preventing anyone from entering or leaving.

A few motorists visited the resort to see what was happening, but were turned away by police.

Two employees who were walking outside the gates told DispatchLIVE they were instructed not to come to work.

Jason Gladwin said he was not at work when the tourists arrived at the resort.

“We were lucky we were not there, but I am sure the place is doing everything possible to work with health officials to make sure this is handled professionally,” he said.

The tourist is the second coronavirus case in the province. On Saturday, a 28-year-old woman who works for Mercedes-Benz in East London was confirmed as the first by the health department.

Mercedes-Benz has not closed its plant in the city as “the employee did not return to the manufacturing operations and has not been in contact with other employees of the company since returning from Germany,” Mercedes-Benz said in a statement.