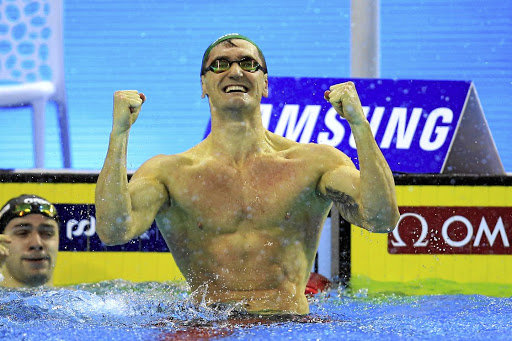 Former Olympic champion Cameron van der Burgh has spoken out about the debilitating effects of Covid-19 after contracting the disease recently, warning the lack of clarification about the Tokyo Games was putting athletes at increased risk as they persevered trying to train.

“I have been struggling with Covid-19 for 14 days today,” the 100m breaststroke gold medallist from London 2012 wrote on Twitter on Sunday night.

“By far the worst virus I have ever endured despite being a healthy individual with strong lungs (no smoking/sport), living a healthy lifestyle and being young (least at risk demographic).

“Although the most severe symptoms (extreme fever) have eased, I am still struggling with serious fatigue and a residual cough that I can’t shake. Any physical activity like walking leaves me exhausted for hours.”

Van der Burgh, one of only three SA Olympians since readmission to have set world records winning while Games' golds, alongside 400m star Wayde van Niekerk in 2016 and fellow swimmer Penny Heyns in 1996, also took the Olympic silver medal at Rio four years ago.

The 31-year-old tweeted his thread shortly after the International Olympic Committee (IOC) agreed to consider postponing the Tokyo Games, which are supposed to run from July 25 to August 9.

“The loss in body conditioning has been immense and can only feel for the athletes that contract Covid-19 as they will suffer a great loss of current conditioning through the last training cycle. Infection closer to competition being the worst,” wrote Van der Burgh.

“Athletes will continue to train as there is no clarification re summer Games and thus are exposing themselves to unnecessary risk — and those that do contract will try rush back to training most likely enhancing/extending the damage/recovery time.”

Van der Burgh left SA to take a job in finance in London, before retiring at the end of 2018.