President will test for Covid-19 if necessary 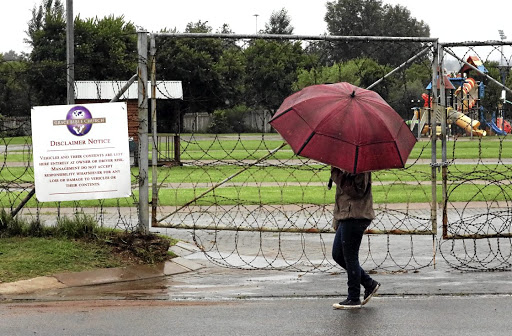 There was no mass at Grace Bible Church in Pimville, Soweto, yesterday. /ANTONIO MUCHAVE

President Cyril Ramaphosa is willing to test for Covid-19 if the need arises, but for now he is still in good health.

This is the assurance given by the presidency last night after ACDP leader Kenneth Meshoe, who had been in contact with the president, confirmed that he has been tested. The results of his test are pending.

In the days before Meshoe met the president, he participated in a Free State gathering where five international guests subsequently tested positive to Covid-19 virus. Meshoe met Ramaphosa together with other political parties in Cape Town on Tuesday.

"The president is in good health. There is absolutely no need [for the test]. As the protocol indicates, we will only make that decision once we get guidance from health [department], following Rev Meshoe's test," Ramaphosa's spokesperson Khusela Diko said.

Minister in the presidency Jackson Mthembu said so far there were no Covid-19 symptoms from Ramaphosa that necessitates a test.

"We can assure you that if there is evidence that the president must undergo any test or any of us, we will not even wink an eye about it, we will not hesitate, we will do so."

Meshoe announced yesterday that he had been tested.

Ramaphosa was expected to brief the nation on Covid-19 last night but this was postponed as the central command council which coordinates the entire response of government to the virus was still meeting and had not concluded its deliberations.

Mthembu said matters before the council were very serious and the president needed to be properly briefed.

Meanwhile, major churches yesterday either cancelled services or adhered to the minimum number of 100 congregants as part of the government's strict regulations to curb the spread of Covid-19.

One of KwaZulu-Natal's latest Covid-19 patients says he's "feeling good" despite testing positive for the virus on Friday.
News
1 year ago

At Grace Bible Church in Pimville, Soweto, the main gates were locked while about 30 vehicles could be seen in the parking lot.

At the Methodist Church, also in Pimville, there was a limited number of congregants. Dineo Mofokeng, a member at the church, told Sowetan less than 30 people attended the service.

A member of the ZCC in Joubert Park, Johannesburg, who asked not to be named, said there were less than 30 people at yesterday's service.

"We were about 30 and sat apart. We struggled to follow the sermon because the priest was very far from us and we could hardly hear him. We were left with no option but to leave."

In Moria, the ZCC only allowed 50 women and 50 men to morning and afternoon prayer sessions. No buses were allowed at church premises.

In Malvern, Johannesburg, about 50 people attended the service at Bethel Lighthouse.

The restrictions also affected business in Soweto at the weekend.

Dozens of taverns and shebeens were left with no choice but to comply with restrictions. Most drinking spots complied with regulations and had to close shop at the prescribed time of 1pm as Saturday was a public holiday.

However, compliance was ignored in some parts of Soweto as other taverns operated with their doors slightly open.

Some patrons at a shebeen in Orlando after 7pm on Saturday said they were not concerned about contracting coronavirus.

"If I die, I die. What's the point of staying indoors? We are people who enjoy going out and drinking... No one can stop us," said one patron..

Thabang Nkosi, who runs a tavern in Pimville, said he did not wish to take chances. "It's terrible for business, but we have to abide by the laws. If I don't abide, my business will be shut down forever."

Police and the Johannesburg Metro Police Department conducted raids over the weekend on taverns and shebeens that failed to comply with the emergency regulations.