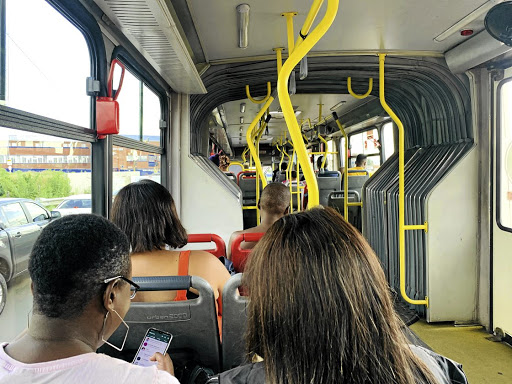 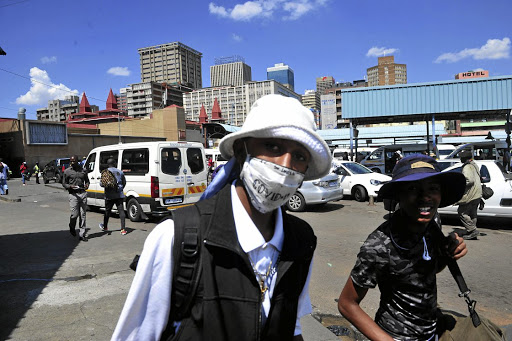 Rea Vaya buses were running per normal schedule with passengers seated next to one another yesterday afternoon, despite new measures to restrict the number of people per seat.

Sowetan took a bus between Parktown and Industria West, Johannesburg, in the early afternoon yesterday and it had several people sitting in pairs.

Some of the measures introduced by Johannesburg mayor Geoff Makhubo were that there would be regular sanitisation and washing of the buses as well as the one person per two seats rule which commuters were not following yesterday.

There were no sanitisers in sight at both stations and inside the buses. Around 5pm, officials at the paypoints were still taking cash, despite Makhubo prohibiting this.

One passenger said that such measures would be impossible on the Rea Vaya bus. The same measures will be implemented on the Metrobuses.

Speaking to Sowetan a day after the measures were imposed, a passenger who only identified herself as Nkele said she felt unsafe.

"Ahh it's the same because now I'm from work, I work every day and then I meet people from different departments, I serve the public. So for me to say I can't sit with my sister because of coronavirus that thing doesn't make sense, it doesn't make any difference for me," she said.

"Yes, I'm really scared of it but I think if I go to work every day and use Rea Vaya every day [I'm at risk]. Just at Thokoza Park [in Soweto] where I'm from, there are more than 200 people who are using Rea Vaya with long queues and you know we are very very close to each other. The only thing that can work is to say we must stay at home and not come to work."

There was no evidence of any coronavirus prevention measures announced by taxi association Santaco bosses at Wanderers taxi rank yesterday.

Santaco bosses took the media to the rank on Wednesday to show all the measures to be implemented at taxi ranks in order to contain the virus.

These included disinfecting the taxi rank twice a day, sanitising the taxis before passengers board and after all have disembarked.

Queue marshals would also provide sanitisers to people arriving at the rank.

But none of this could be seen when Sowetan visited the taxi ranks in the Johannesburg inner city yesterday. Commuters were going on with their business as usual, some with face masks and some with gloves to protect themselves.

The only shred of evidence of preventative measures was a group of health workers from the Hillbrow clinic near the Noord Street taxi rank who were distributing pamphlets and taking time to explain to commuters how they can prevent infection. To make matters worse, the toilets at the rank did not have water.

"After the launch yesterday, we asked Santaco officials to leave some equipment and they said they will only give it to us on Monday. So we are waiting," said Phineas Chirwali, who manages all operations at the rank.

It was the same story at the Bree Street taxi rank. There was no water in the toilets and no sanitisers for taxi drivers and their vehicles.

Santaco president Philip Taaibosch announced the introduction of the safety measure that were to be implemented with immediate effect in Gauteng, KwaZulu-Natal and later the rest of the country.

Efforts to get comment from Santaco yesterday were fruitless as it did not answer calls or respond to text messages.

Earlier this week the government indicated that high-density public transport spaces such as taxi and bus ranks would be equipped with screening facilities to curb the spread of coronavirus.