Self-taught artist coins it with art 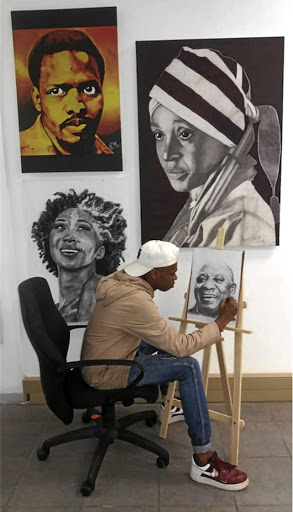 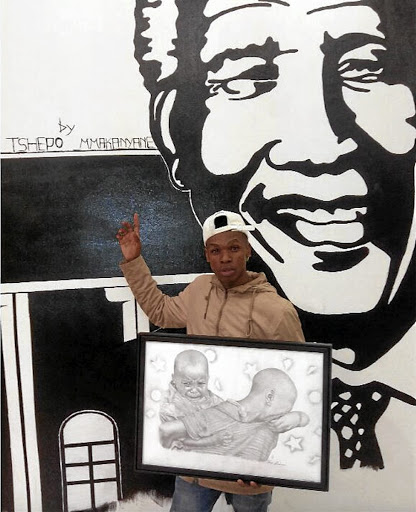 Tshepo Mmakanyane, 21, uses either a pencil, pen, charcoal or paint to draw his artwork, which he displays at the Sunnypark shopping centre in Pretoria.

Mmakanyane, who hails from Dennilton in Limpopo, says he developed his love for art at the age of 16.

"When I was a teenager in high school, my art work was complemented by my fellow pupils and teachers.

"I started to do portraits while I was in grade 11 in 2016 at Mohlamme High School to generate pocket money," he said.

He has drawn politicians, including Struggle icons Nelson Mandela and Steve Biko.

"I am passionate about art. I learned this craft on my own to depict our political icons as our role models and to also draw inspiration from their success stories," Mmakanyane said.

Although he struggled to convince his parents that he could make a living from art, he was eventually discouraged to pursue a fine arts qualification.

"After I passed my matric in 2018, my parents didn't want me to pursue my studies in fine art. I went to Tshwane South College in Centurion to enroll for electrical engineering studies. I continued to soldier on with my God-given talent to make extra income," he said.

Mmakanyane now conducts informal classes in an effort to assist other young artists to improve their craft.

He told Sowetan his lessons mainly focus on how to best shade a picture and the best material to use.

One of his students, Mukundi Netshitungu said: "I attend [Mmakanyane's] art lessons during the week and on weekends in an effort to keep myself from the streets... and to improve my [drawing] talent and skill."

Mmakanyane feels that perseverance has finally paid off for him after he won a youth expression art competition which gave him an opportunity to do an art mural of Mandela and R5,000 in prize money.

He was also afforded a platform to display his art inside the pop-up art gallery in the Sunnypark mall.

Mmakanyane said his application to open his own gallery shop was recently approved.

SA chefs cook up a storm at the culinary Olympics

Today, my friend, let's walk away from the madding crowds. Leave the politicians to their bickering about who is the worst spouse abuser among them.
Opinion
1 year ago
Next Article