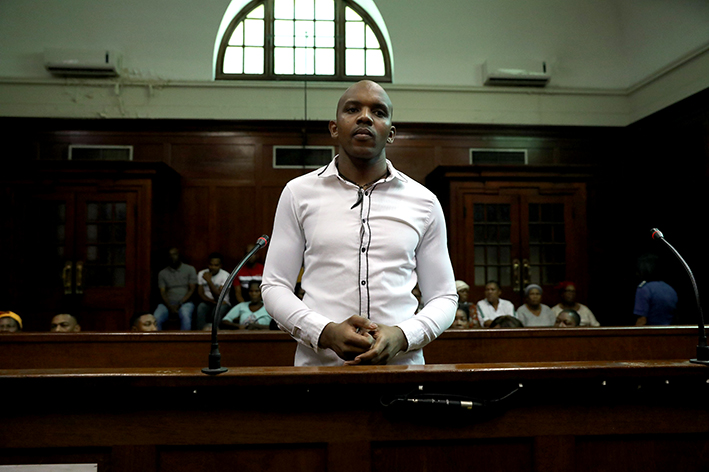 Thabani Mzolo was given a life sentence for killing his ex-girlfriend Zolile Khumalo in 2018.
Image: Sandile Ndlovu

“Wathinta abafazi wathinta imbokodo, uzo kufa” (You strike a woman, you strike a rock. You will die).

This was uttered by Durban high court judge Nompumelelo Radebe as she sentenced Thabani Mzolo to life imprisonment for the 2018 murder of his former girlfriend, Mangosuthu University of Technology student Zolile Khumalo, at her residence.

The gallery, filled with MUT students and family, erupted with cheers as judge Radebe handed down the sentence in the Durban high court on Thursday.

“Violence by men towards women in South Africa is escalating at alarming proportions. This calls for harsh sentences to be imposed,” said Radebe.

In May 2018, Mzolo gained access to Khumalo's Lonsdale student residence in central Durban where he shot and killed her while in the company of a roommate and a friend.

Radebe said he took the life of a young, budding women, despite her pleas for mercy.

From the gruesome murders of entire families to the tragic death of a young girl in a botched hijacking, here are seven murder cases to watch in 2019.
News
3 years ago

The Khumalo family is hoping that this week will be the last time they have to travel nearly two hours to Durban from Eshowe, in northern KZN, when ...
News
2 years ago

During the trial, the state introduced cellphone recording evidence in which Mzolo can be heard saying he killed Khumalo for being disrespectful.

In mitigation, Mzolo's lawyer, advocate Bonokwakhe Dlamini, argued that Mzolo was a young person who had a lot to offer his community. He said that the father of one was an intelligent person who had given back to his community by helping grade 12 pupils at his school register for university.

“How do you factor in a person's intelligence under mitigating circumstances in, for example, instances where someone has committed murder?” asked judge Radebe.

Dlamini was jeered by a packed court gallery when he said that Mzolo loved Khumalo and intended to marry her.

Senior state advocate Nadira Moosa said Mzolo was a “cold and calculated killer” who should be given a full sentence, especially given the high incidence of gender-based violence in the county.

“He felt that he had a right to take her life because she had the audacity to terminate the relationship with him. The evidence I submitted clearly shows the accused to be a ruthless and cold-hearted killer,” said Moosa.

“The accused's arrogance was evident throughout this trial. The court observed him smiling like the trial was a mere inconvenience to him,” she added.

“He took the life of a young and budding woman who was still herself a child. He killed despite her pleas,” said Radebe.