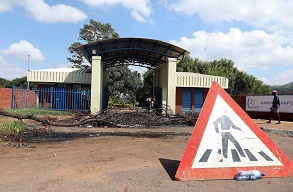 A protest that had rocked a North West tertiary institution for a month has been halted.
Image: Thulani Mbele

A month-long protest by students at Orbit TVET college, Mankwe campus outside Rustenburg, has finally been called off.

This comes after a lengthy meeting with members of student representative council (SRC) and the college management.

However, students who were complaining, amongst other things, about dilapidated infrastructure, academic exclusions and non-payment of national student financial aid scheme funds are now calling for the institution to be under administration.

In the morning, a group of students were seen sitting next to the college entrance which was barricaded by tree branches.

SRC secretary Brian Selloe said there have been no learning and teaching since the beginning of this academic year.

"We feel that management is not ready to deal with our issues, hence the call for the institution to be under administration. We are also concerned about our SRC president who was academically excluded without following proper procedures.

He failed two trimesters and the college decided to exclude him whereas we have students who have been with the institution for the past eight years," he said.

Students had mixed views about the protest as others felt that it was a waste of time.

A boiler making student said he was supposed to complete his studies in a period of three months.

"These couple of weeks felt like we were on a vacation because we have been doing nothing. I pay a rent of R650 and my parents survive on a government grant, but they had to share the little that they had with me. All that money went down the drain because there has been no teaching and learning. We have to fight for the SRC president who is demanding to be unblocked from the system even though he knows he failed two trimesters," he said.

Molefe Mosweu, 21, a mechno technology student, said he joined the college in 2018 and there have been protest every three months.

"We are worried about our safety. Some of these buildings can collapse anyday. We also don't have study materials, but we are expected to write final exams later this month. We were protesting to attract the attention of the relevant people," he said.

SRC president Nkosinathi Delmani said he feels that his exclusion was personal.

"However, for now our priority is for students to get back to classes. We have given management time to deal with our issues. We hope that by Monday, everything will be back to normal," he said.

The community of Barberton in Mpumalanga on Monday set alight the constituency offices and the municipality building during a long-running protest ...
News
2 years ago

Two KwaZulu-Natal MECs will be deployed to Ladysmith amid ongoing violence by protesters calling for the removal of mayor Vincent Madlala.
News
2 years ago
Next Article