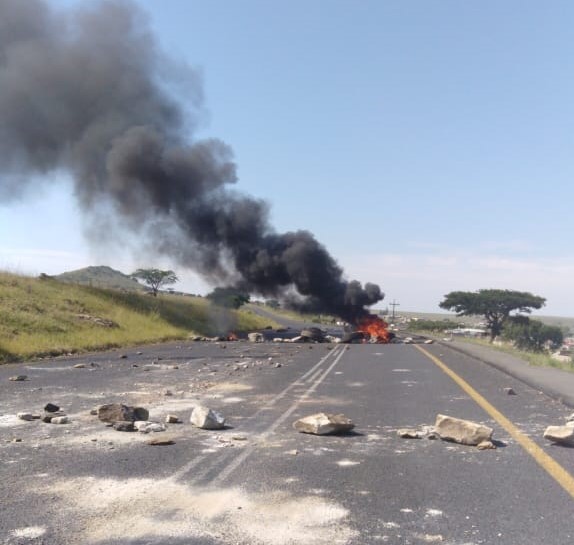 Protesters set tyres alight and used rocks to block entrances to Ladysmith, in northern KwaZulu-Natal, this week as calls for the removal of a mayor intensified.
Image: SAPS

Two KwaZulu-Natal MECs will be deployed to Ladysmith in northern KwaZulu-Natal amid ongoing violence by protesters calling for the removal of mayor Vincent Madlala.

MEC for transport, community safety and liaison, Bheki Ntuli, and  economic development MEC Nomusa Dube-Ncube will on Saturday "engage with all stakeholders" regarding their grievances. Dube-Ncube is also the champion MEC for the Uthukela district.

Tensions within the community have been brewing over the past month. At least three protests have taken place calling for the axing of Madlala, whom residents blame for the lack of service delivery and accuse of being involved in taxi violence in the area.

Angry residents of Ladysmith, in northern KwaZulu-Natal, embarked on protest action yesterday. They
News
1 year ago

On Wednesday protesters took to the streets, blockading all roads leading in and out of the town.

On Thursday, protests continued as local taxi organisations were roped in and intensified the actions, forcing businesses, schools and banks to close.

It is alleged that protesters threatened workers at the water pump stations to down tools, resulting in residents being without water for three days.

Local businessman Pravesh Dookhee, 50, who previously chaired the water task team in Ladysmith, said the town was under siege.

"You cannot get a town where there is no law and order. How can a small group of people hold an entire town under siege?"

Dookhee agreed that service delivery was a problem in Ladysmith, citing that water interruptions had been an issue for more than a decade.

"Certain parts of Ladysmith have water interruptions virtually every day. I was the chair of the water task team in Ladysmith in 2011 and back then we attempted to resolve this problem, without success."

Police say 21 people in #Ladysmith -northern KZN - have been arrested following ongoing protests this week. It is unclear whether anyone in this video was arrested. Protesters blockaded all entrances and exits to the CBD, calling for the removal of the mayor. @TimesLIVE pic.twitter.com/dn9MTtLIyR

He said while he understood the plight of the people, protesters should rather mobilise and take the council to court.

"Some protesters went to an extent of damaging stop signs and tarmac. You are virtually destroying the town even more. Why not rather take things on in a lawful way. If you are not happy with the mayor, take him to court and make him answer," he said.

Police said on Friday six taxis had been impounded and 21 people arrested for charges relating to public violence, interfering with and obstructing police officers in the line of duty, common robbery and being in possession of unlicensed firearms and ammunition.

KwaZulu-Natal provincial government spokesperson Lennox Mabaso said Ntuli and Dube-Ncube would engage with all stakeholders and report back to premier Sihle Zikalala.

"They will attempt to resolve the issues. The premier is committed to hear all stakeholders who are critical in the matters".

In May last year, Madlala's son was shot dead, together with his friend, while a third person was seriously injured. Police at the time said two counts of murder were being investigated after Siboniso Mondli Madlala, 28, and his 29-year-old friend were killed.

The tragedy came three months after Oscar Hlatshwayo, 38, an executive director of engineering technical and infrastructure services at Alfred Duma local municipality, was shot several times in an apparent ambush after dropping his children at school.

DUT to spend R303m on upgrading student residences and facilities

"Our equipment must also be state-of-the-art," urged Durban University of Technology vice-chancellor Prof Thandwa Mthembu on Wednesday.
News
1 year ago
Next Article