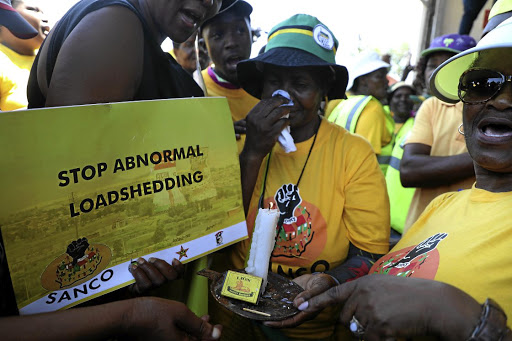 Residents of Soweto have expressed their frustrations with power outages, prepaid meters and the disconnection of some neighborhoods from the power grid.

Led by SA National Civic Organisation (Sanco), the residents marched to Eskom offices in Diepkloof yesterday to hand over a memorandum of demands after their attempts to shut down the township failed.

Joburg mayor Geoff Makhubo joined residents in the march, saying the issues raised by residents affected them as the ANC.

"There is unrest and instability in Soweto, Orange Farm, Diepsloot and Ivory Park," said Makhubo.

"The problems that are presented by this loadshedding and people with no electricity for more than a year affect our councillors because people march, they vandalise their houses, so we thought we must join this march in solidarity with the people and engage Eskom from our vantage point so that we find a lasting solution to the problem."

Makhubo said the people who were causing problems were the board and the management.

"You just never know when it's going to go and when it comes back," she said.

Residents of Nomzamo section in Soweto blockaded roads on Tuesday morning because they said they've been without electricity since May last year.
News
1 year ago

The organisers of the Soweto mass shutdown say they will try other ways of getting the attention of power utility Eskom following the failure of ...
News
1 year ago

"We live in RDP houses, but we don't understand how people from shacks have electricity," said Mbathane.

"We think that thing is wrong," said Itshegetseng also complained that
the power utility was making billing rrors.

"Some people are being overcharged and Eskom is not
responsive, and if they are not responsive, we resort to going to the streets," he said.

Zoleka Molefe, of Slovo said she wanted Eskom to put electricity meters for everyone.

Sanco deputy chairperson in the Greater Johannesburg region Phashe Magagana said Eskom must stop with the
extended loadshedding in townships.

"If loadshedding is two hours, it has got to be two hours not more than four hours," Magagana said.

"In some instances you find loadshedding going on more than half a day and that is
unacceptable."

Magagana said people should be notified when the electricity is going to be switched off so that they can be able to switch off their appliances to avoid damages.

Magagana said they were
also advocating for a flat rate of R150 a month for all Johannesburg households.

"This will save Eskom from losing all the monies that it is losing currently because people are owing lots of money and Eskom comes and switches them off," he said.

"People then later on reconnect themselves without paying Eskom at all.

"So we are saying, if it's R150 per month, Eskom will definitely get money out of those people on a monthly basis."

More electricity protests were expected this week with the EFF preparing to march to Eskom's Megawatt Park.