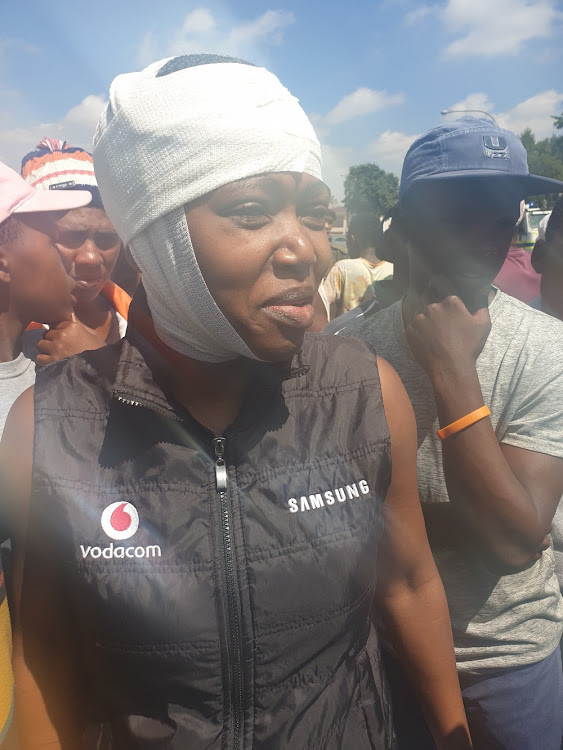 Andiswa Dlepu alleged she was struck by a rubber bullet fired by metro police officers while she walking to work.
Image: Belinda Pheto

Residents of Nomzamo section in Soweto blockaded roads with rocks and burning tyres on Tuesday morning because they said they've been without electricity since May last year.

They said they resorted to protest action because it's the only language government understands.

Area ward councillor Sechaba Khumalo has asked for calm and invited the furious Soweto residents, who said they have been without electricity for eight months, to join councillors on Wednesday to march to the Eskom offices in Diepkloof.

"Your anger is going to help us make Eskom listen to us," Khumalo told the angry crowd.

He said they had been to the Eskom offices on several occasions to escalate Nomzamo section's electricity issues.

He denied claims that councillors were hijacking an already planned protest by Nomzamo residents.

"We are always protesting and all I'm asking here is that the residents join us when we visit Eskom offices to have their issue resolved," Khumalo said.

Parts of Soweto were on lock down Tuesday morning, and residents have vowed to continue with their shutdown until their electricity is restored.

Community leader Wandile Rhafuza said they had been without electricity since May last year, and claimed they have made several attempts to engage Eskom on  the issue.

He accused their councillor of not addressing their problem, but Khumalo disputed this and said he was always on the ground trying to address issues in the community.

Rhafuza disputed claims that residents were not paying for electricity and this is why services were cut.

"The problem is that Eskom has installed faulty meters and when we buy electricity it doesn't go through," he said.

Two women showed SowetanLIVE's sister publication TimesLIVE injuries they claimed to have sustained at the hands of metro police officers.

"We were at no point violent. They fired rubber bullets at us while we were trying to close the roads with rocks," Nomusa Msiza said.

Another resident, Andiswa Dlepu, has injuries on her head and claims she was shot at by metro police while walking to work at 5am on Tuesday.

"I was walking across the protesting crowd and was shocked to be feel something on my head and see blood dripping down," she said.

Wayne Minnaar, JMPD spokesperson, said earlier on Tuesday there were no reports of injuries, damage to property or violence at the #SowetoShutdown protest.

“There is a group of 50 people picketing on the corner of Chris Hani and Elias Motsoaledi roads. The other group of protesters started as early as 6am and at about 7.40am they tried to block roads with rocks but police managed to disperse them,” Minnaar said.

No load-shedding planned for Tuesday: Eskom

Eskom says it does not plan to implement load-shedding on Tuesday as some of its generation units have returned to service.
News
2 years ago

No load-shedding for Sunday unless something breaks, says Eskom

Eskom does not expect to implement load-shedding on Sunday.
News
2 years ago
Next Article