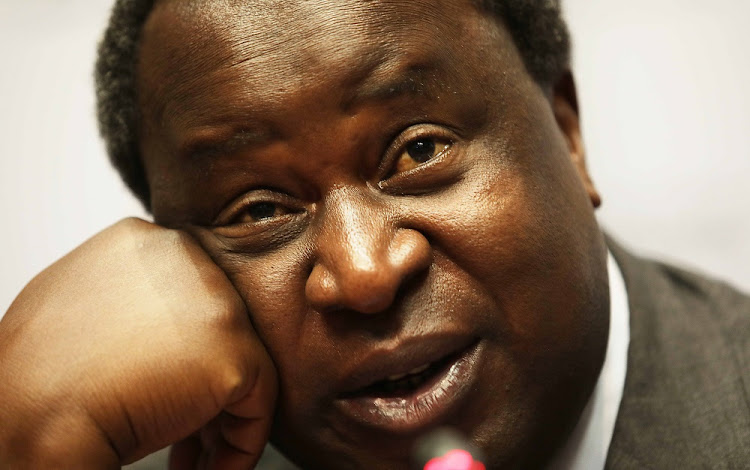 Finance minister Tito Mboweni addresses a news briefing before his presentation of the national budget in parliament on February 26 2020.
Image: ESA ALEXANDER/SUNDAY TIMES

President Cyril Ramaphosa's administration is headed for a bitter battle with public sector unions after finance minister Tito Mboweni announced plans to reduce the civil service wage bill by R160bn in the next three years.

Tabling his budget for the 2020/2021 financial year in parliament on Wednesday, Mboweni stunned the nation when he proposed that the multibillion-rand cut in the compensation of public sector employees.

Mboweni also announced that there would be no salary hikes for public office bearers such as MPs, ministers, judges and magistrates in the upcoming financial year.

Amidst a tough economic environment punctuated by sluggish growth and declining tax revenue, Mboweni told MPs that the national treasury aimed to reduce government's wage bill by R37.8-billion in the year ending March next year.

In his budget review document tabled in parliament, Mboweni bemoaned the fact that public service salaries have grown by up to 40 percent in real terms in the last 12 years, which he said was "increasingly out of line with the rest of the economy."

"The 2020 budget proposes a reduction in the compensation budgets of national and provincial departments, and the entities that receive transfers directly from national government," read the budget review.

"The revised amounts will guide government forthcoming talks in the public service co-ordinating bargaining council. These reductions can be achieved through a combination of modifications to cost-of-living adjustments, pay progression and other benefits."

Mboweni also said the National Treasury would also be reining in the remuneration as well as financial incentives of CEOs and other top executives employed by state-owned firms.

Government has long being criticised for paying "excessive" salaries to CEOs of its SOEs, including those financially struggling such as Eskom, SAA and SABC where the basic pay of a chief executive is no less than R5m before bonuses and other incentives are factored in.

Mboweni announced that government would in the next financial year table a bill that would set out a legal framework for the salaries of SOEs and other public entities.

"Wage bill growth outside the public service is also contributing to fiscal pressure. During 2020, government will legislate a remuneration framework for public entities and state-owned companies.

"The framework will improves alignment of pay scales with the public service, and contain excessive salaries and other payments."

Mboweni appeared disappointed that civil servants were not taking up the early retirement offered he tabled last year, which was aimed to reduce the wage bill by R27bn.

The minister had hoped that at least 30,000 civil servants aged 55 and above would take up his early retirement offer. He said of all government departments, only the SAPS had begun offering early retirement to police officers who were 55 years and older.

"Take-up of the early retirement initiative has been slower than anticipated, and only the department of police has finalised implementation during 2019/2020.

"Other departments have submitted proposals, which are being processed and may result in further adjustments to baselines. At this stage, the anticipated savings have been largely reversed."

Hundreds of women protested outside the parliament gates in Cape Town on February 26 2020, ahead of finance minister Tito Mboweni’s annual budget speech. Representing various organisations, the women called for greater budget allowances for social grants and the fight against gender-based violence.