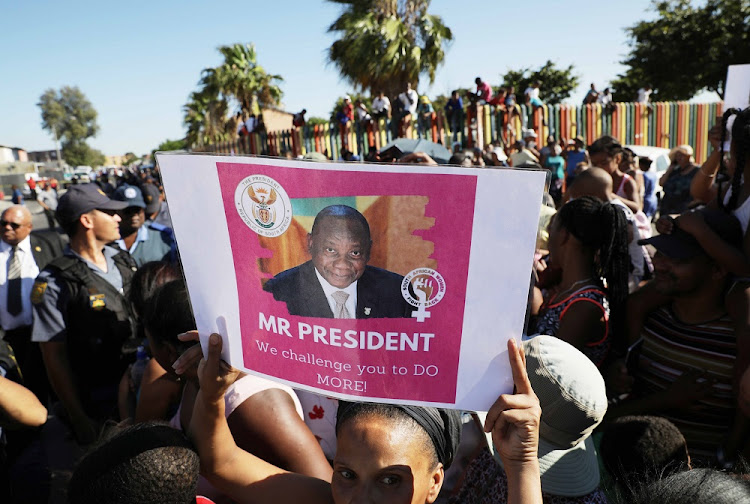 President Cyril Ramaphosa was greeted by calls for a return of the death penalty.
Image: Sunday Times/Esa Alexander

President Cyril Ramaphosa declared “the state should oppose bail and parole for perpetrators of rape and murder against women and children”. That was six months ago, when he visited the family of slain student Uyinene Mrwetyana.

On Tuesday evening he stood in front of the parents of eight-year-old Tazne van Wyk and apologised to the family and the community that Moehydien Pangaker, the man police suspect murdered the child, was released on parole after being convicted of culpable  homicide, child abuse and kidnapping.

“We are here to pay our respects to the family of the deceased little girl. Our hearts are very sad indeed about the untimely death of this little girl, who was brutally killed by somebody who was released on parole,” said Ramaphosa.

“He should never have been released on parole. It is quite clear to us that a big mistake was made in having him released from parole. After he was released on parole he came out and (is alleged to have) committed murder. That shows that there is something wrong with our parole system, something went horribly wrong. Things should never have turned out this way,” said Ramaphosa, using a loudspeaker.

Community on the Cape Flats wants the death penalty for those who rape women @TimesLIVE pic.twitter.com/ntjf0j5NMY

He was heckled by community members on a packed Clare Street, where Van Wyk disappeared two weeks ago while walking about 15 metres between her home and a tuck shop.

Residents vented their anger at the criminal justice system on Friday by torching suspected drug dens in Parow after more than 1,000 people descended on the Goodwood magistrate's court for Pangaker's appearance.

He did not attempt to ask for bail. It was clear, should it be granted, it could cost him his life.

Which is what residents called for after Ramaphosa apologised for the failings of the criminal justice system.

“I stand here to say that we are sorry as the government that a person who was never supposed to be released on parole was released. We are sorry about that.

“This will never take away the pain that all of you are feeling here. We know as the community you are feeling a great pain, as you must. Because the problem of gender-based violence, and where violence is also perpetrated against children, should come to an end and this should never happen again,” he said. 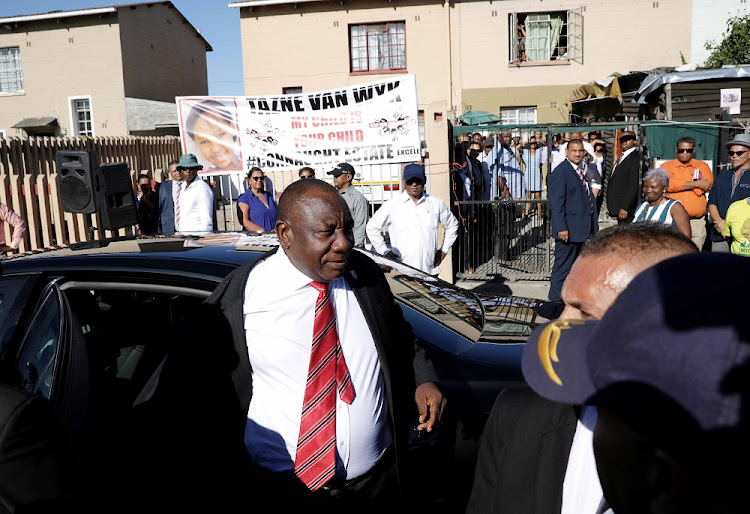 Ramaphosa tried to explain that the right to life was ensured in the constitution, but that he was taking steps to strengthen the criminal justice system.

“We are feeling so much pain that we want those who rape and kill women and children to be given the ultimate sentence of the death penalty. I know that's what you want because you are feeling the pain,” said Ramaphosa.

“This is the call we made to our courts. Once a man is found guilty of rape or femicide or murder of children there must be a refusal of bail,” he said.

Resident Ronaldo Jacobs knew Van Wyk. She grew up in front of him and he met her at a feeding programme for children, where he volunteered.

“The president's visit means a lot to the parents, but personally I'm not happy. Every time promises are made. At the [Uyinene] strike outside parliament the same promises were made and a few months later more kids are raped and murdered. There needs to be drastic action and examples need to be made. If they want to see changes in our country they need to bring back the death penalty. That's it,” said Jacobs.

He questioned whether members of parole boards were fit for their positions.

“How can you make a decision like that for a person who has committed so many offences,” he said.

The grieving parents of eight-year-old Tazne van Wyk have received a visit from President Cyril Ramaphosa in the Cape Flats suburb of Elsies River on ...
News
1 year ago

He said Pangaker had walked freely in Elsies River, despite absconding from parole.

“I know this guy. He was a nice guy, that's how he comes across.”

Jacobs also asked how it was possible that the community did not report Tazne's snatching to police.

“I can't believe that at that moment no-one saw that something was wrong.”

Members of the Mitchells Plain Crisis Forum, an organisation started after the murder of 11-year-old Stacha Arendse, stood vigil outside the home of Tazne's parents, Terence Manuel and Carmen van Wyk. They supported the family immediately after Tazne was reported missing.

The organisation's deputy chairperson, Achmat Isaacs, said Ramaphosa's visit so soon after Mrwetyana's murder was an indictment on the government.

“I think we have reached a breaking point ... We have all these murders and nothing has changed. The system is still operating the way it was operating,” he said.