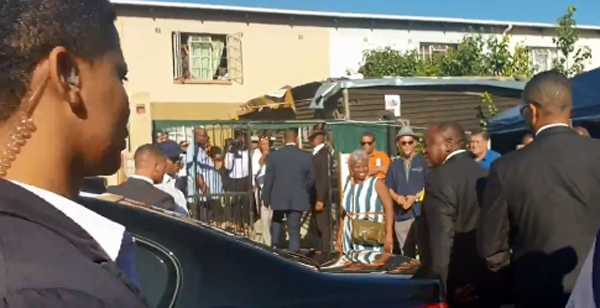 The grieving parents of eight-year-old Tazne van Wyk have received a visit from President Cyril Ramaphosa in the Cape Flats suburb of Elsies River on Tuesday.

The Western Cape ANC confirmed Ramaphosa’s visit to 65 Clare Street‚ where Tazne was last seen by her parents before she was allegedly kidnapped by Moehydien Pangaker.

The 54-year-old Pangaker has been charged with her murder‚ and Ramaphosa’s visit to “express his heartfelt condolences and sympathy” follows a riot after Pangaker’s appearance in Goodwood magistrate's court on Friday.

Hundreds of protesters torched houses and flats which the community alleged were used as drug dens and brothels. The community also alleged that Pangaker took Tazne to one of the houses before he murdered her.

Pangaker was arrested in the Eastern Cape and allegedly led police to the murder scene in Worcester and was able to point out a stormwater pipe where they found the girl's body.

Van Wyk's lifeless body was discovered in a stormwater pipe last week. 58-year-old murder suspect, Moehydien Pangaker is convicted criminal who was out on parole.@Newzroom405 pic.twitter.com/PIfb1jWeuE

This was after it emerged that Pangaker absconded from parole in 2015 after being convicted of culpable homicide‚ child abuse and kidnapping in 2008.

“It is the job of our justice system to keep criminals behind bars. If it is true that this suspect‚ who had previously been convicted and released 11 times‚ was able to get parole and commit this violent crime‚ then our criminal justice system has failed our residents. Further investigation is needed into the systemic issues faced in our parole system‚” said Fritz.

Elsies River resident Geraldine Jaffa’s waits outside the home of #TazneVanWyk where President Ramaphosa is visiting the family of the slain 8yo girl. Her kids used to play with Tazne before she was kidnapped, now she fears for her own children. pic.twitter.com/H0SdKxajLu

He said Pangaker was released in 2015 having served only seven years‚ and despite having previously broken the terms of his correctional supervision.

“He was placed on parole supervision between October 2016 and May 2019. He then again absconded supervision and a case was opened‚” said Fritz.

“Clarity is needed on why Pangaker was not arrested after he absconded. I will ask the Western Cape police ombudsman‚ JJ Brand‚ to urgently investigate this.”

Pangaker was remanded in custody until April 17 for further investigation.