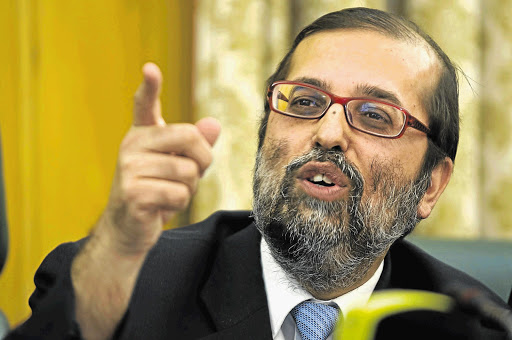 Former communications minister Yunus Carrim on Tuesday told the state capture inquiry that he decided not to volunteer his testimony because he would be perceived as having sour grapes for not being reappointed to cabinet after the May 2014 elections.

Carrim, an ANC veteran with struggle credentials spanning 40 years, said he agreed to go to the inquiry only after being approached by its legal team and investigators.

In his view, his testimony was, in any case, overshadowed by that of former ministers such as Ngoako Ramathlodi and Barbara Hogan.

Furthermore, talk in some ANC political circles was that those who once served in government who testified were bitter. This is a label he was not ready to face so he did not volunteer to testify.

"I fully support the judicial commission of inquiry into allegations of state capture, corruption and fraud in the public sector, including organs of the state," said Carrim.

"I did not approach the commission with any complaints about my experience as a minister nor did I urge anybody to do so. It was the commission that approached me for co-operation.

"I was asked by a few ministers and senior members of the ANC to approach the commission about my experience as a minister, but I did not want to as I felt that the commission had enough explained.

"I also felt that my experience was far overshadowed by former deputy minister [Mcebisi] Jonas, minister [Pravin] Gordhan and former ministers Ramathlodi and Hogan and others.

"Besides, I did not want to seem as if I am some sort of cry baby running to the commission to settle political scores because I was not reappointed as minister after the May 2014 elections.

"In some political circles there is a sense that those former ministers and others who were removed from positions or not reappointed approached the commission to settle political scores."

Commission chair deputy chief justice Raymond Zondo did not take kindly to this.

Zondo said those who discouraged people from testifying at the inquiry had something to hide and wanted to render its proceedings meaningless.

"There are people who have discouraged people from coming forward. We’ve got to try and just do the right thing," said Zondo.

"The less this commission knows the better for certain people. We may be hampered when it comes to say what kind of recommendations we put up if people who have information do not come forward.

"Some of the people who may have been involved in some of the things we are looking into may not want that door [of corruption, fraud and maladministration in the public sector] to be closed so they can come back and continue with what they were doing."

Carrim did not agree with this, saying not all who did not want to testify had malicious intent to derail the commission.

"It is not all people who have something to fear, who feel this is not the forum to deal with these issues. There are people who share your values who also feel that the more you go there the more you reproduce this and it damages the economy and our image as a country," said Carrim.

The former minister is testifying  about the controversial digital migration policy of government and the archives deal between the SABC and MultiChoice.

For him, these two issues were a matter of  "policy capture" wherein MultiChoice used "clandestine" means to influence government policy.

He blamed Koos Bekker, the head of Naspers.

"Mr Koos Bekker is behind it. Mr Bekker, as I say, was the key," claimed Carrim.