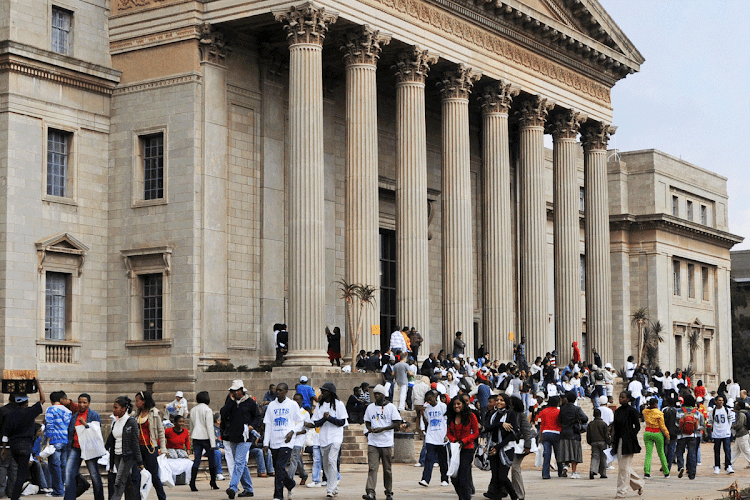 About 80 students at Wits on Friday went to the financial aid office, questioning why they had not yet received their NSFAS allowances.
Image: Supplied/Wits Plus

Students from the University of the Witwatersrand disrupted work at the financial aid and scholarships office on Friday, wanting to know why their allowances from the National Student Financial Aid Scheme (NSFAS) had not been paid.

The group of about 80 students gathered at the education campus bus stop about 10am, before making their way to the financial aid office at the main campus, where they demanded answers from the managers.

They wanted to know why they had not received their allowances, which they expected to receive two weeks ago.

“It’s difficult to focus and stay concentrated at school because we do not have food. We cannot function only on water throughout the day. It is a challenge academically and without having eaten, it's hard to be productive,” fourth-year student Amogelang Mamogobo told TimesLIVE.

Kort addressed the students and asked them to submit their student details. She said her office would try to process every student's payment forms and asked for time to work through the list she received.

The students responded that they would wait and see how far her office got. SowetanLIVE's sister publication TimesLIVE understands that the students had dispersed by about 3pm, and that about half of their allowances had been processed.

A war criminal has found a safe haven in South Africa, a Cape Town magistrate ruled on Friday.
News
2 years ago

Four students have been arrested at the Durban University of Technology (DUT) after unrest broke out at Steve Biko campus yesterday.
News
2 years ago

“We have more than 10,000 NSFAS-funded students at Wits and we’ve only just finished registration. So we are still trying to process the allowances. We have accelerated the process and we expect that all outstanding NSFAS allowances for the whole university should be processed by next week Friday.

“We’re making a plan to make sure that everybody gets sorted by then,” said Kort, who was speaking to TimesLIVE after addressing the students.

Samantha Mungwe — the chair of the Wits education campus students' council and member of the student representative council (SRC) — said that no students had received their allowances since the beginning of February.

She said this was because the financial aid office at the education campus processes only Fundza students, and no longer deals with NSFAS students.

“The financial aid office at the education campus is short-staffed, has a lack of equipment and all forms that we submit at our (education) campus are sent here to main campus for processing. That is why we came here for answers,” Mungwe said.

Kort, however, denied this, saying that all financial aid matters at the education campus could be addressed there.

Second-year education student Mbali Marimana said: “We feel like, as students from education campus, we are not taken seriously. We feel like nothing happens unless we fight for it.”

Security personnel surrounded the students while they were sitting waiting for an update on the processing of the money. The students were not violent, and sang protests songs.

Asked why campus security was brought in, Kort said it was to ensure safety.

“There is not really a security threat but it's university protocol,” Kort added.