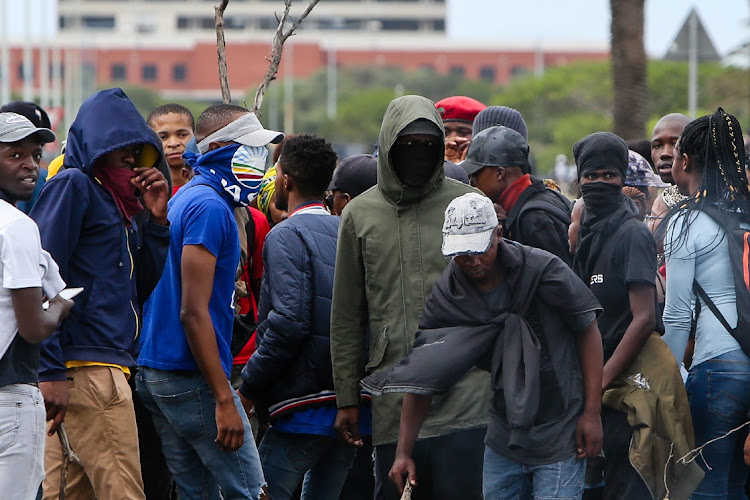 Nelson Mandela University’s (NMU's) management said all university activities will resume on Tuesday, but student leaders insist that while students have nowhere to sleep and nothing to eat it cannot be business as usual.

Protesting students disrupted registration at the university on Monday by blocking entrances to the campus, reported HeraldLIVE.

Members of the South African Students' Congress (Sasco), the DA Students' Organisation (Daso) and the EFF said Monday's protests aimed to help destitute students get off the streets and into classes.

Sasco chair Axole Xotyeni said its members had decided to put their differences aside and work with other student organisations because they shared the same struggle.

This included students not being able to register because of past debts, a lack of accommodation and student records being withheld as a result of debt.

Students from the uMfolozi TVET College Richtek Campus in Richards Bay, northern KwaZulu-Natal, took to the streets on Monday.
News
1 year ago

The students said a big issue was finding accommodation that was accredited by the university, because accredited accommodation was a must for those funded through the National Student Financial Aid Scheme (NSFAS).

The university announced at 2pm that it was exercising its right to enforce a standing interdict that prohibits protesting students from blocking access to the institution.

University spokesperson Zandile Mbabela said: “A significant challenge that arises at this time of the year relates to student funding, which enables a number of processes such as registration, residence placement, the disbursement of allowances to funded students and so forth.

“The university is aware of students who are still awaiting funding statuses or having difficulty accessing their financial aid allowances due to a number of reasons.

“While students may have been approved for funding from NSFAS, there is still a verification process that needs to be carried out before they can be cleared for registration, following which NSFAS releases allowances.

“As such, the university’s financial aid office is in constant liaison with the NSFAS in a bid to address challenges and bottlenecks experienced by students in this regard.”

The family of Alfa Mpetsheni, a SA student based in China who went “missing” more than a month ago, has been informed that he is alive.
News
1 year ago

Mbabela said in light of discussions held on Monday with student representative council (SRC) members, academic activities and all university operations would continue as normal on Tuesday and a response to the students’ memorandum would be given in due course.

Xotyeni said the Sasco-led SRC had engaged NMU’s management on January 7 about the same issues, without success.

Consequently, it was decided to shut down the campus.

Late on Monday, Xotyeni said a decision about whether the protests would continue would be made at an evening meeting.

An EFF member, who refused to be named, said Monday's action was not so much a protest but rather a plea for help for students who could not register or get accommodation.

Later in the day, on hearing that management said the university would be open as usual, he said: “Management are not taking us seriously. We will continue the protests.”

Daso SRC member Ayabonga Mxotwa and Daso NMU chair Prince Sekere said they were sad that they had to resort to protest action.

Mxotwa said students had held a peaceful sit-in on  February 13, at which a memorandum of demand had been handed over, but nothing had come of it.

Daso institutional chair Lehlohonolo Sekere said about 6,000 students had still not been registered and about 100 students did not have accommodation.

A 23-year-old student from KwaBhaca, who asked not to be named, said he dreamt of breaking the cycle of poverty in which his family had been trapped, but now he was not able to register as a result of money owed to the university.

Four students have been arrested at the Durban University of Technology (DUT) after unrest broke out at Steve Biko campus yesterday.
News
1 year ago

For survival, the student depends on the goodwill of friends while he tries to pay his way with loans and NSFAS funding.

“This is very painful for me, the thought of going back home tears me up. All I wanted was to be a role model to my younger siblings and family, and provide for them,” he said.

An NMU second-year student from Limpopo, who also asked not to be named, said he had neither friends nor family in Port Elizabeth and, since arriving in the city on January 15, had been sleeping at the Daso offices because he could not afford accommodation.

He said he could not afford to go back home as his entire family, three sisters and two brothers, relied on his father’s grant for survival.

During his first year he received funding from NSFAS but that had been withdrawn in November and he had yet to be given an explanation. He was appealing the decision.

He said while classes continued — and he fell behind — he could not register.

Even if he could, he doubted he would be able to concentrate because his living conditions were such that he had to wash in a sink as he had no ablution facilities.