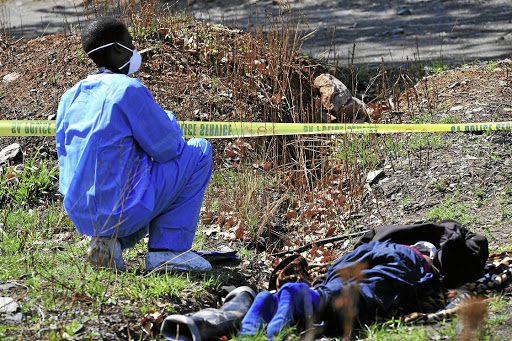 Forensic investigators at work after bodies of illegal miners were found in Springs, East Rand, in this file picture. Nine more bodies were found on the West Rand at the weekend. /Veli Nhlapo

Fear and panic has gripped the community of Matholeville after nine zama zamas were killed in a deadly attack in the West Rand township in an alleged turf war over control of disused mine shafts.

Several community members in the area told Sowetan that an angry group of illegal miners from Zimbabwe attacked their counterparts from Lesotho, leaving nine people dead on the streets.

Residents said the fight was about the rights over the illegal mining in the area.

But Gauteng police spokesperson Brig Mathapelo Peters said the killings came after a group of suspects allegedly accused their victims of being involved in criminal activities that attract the police to their illegal mining operations.

Peters said 87 people were taken in for questioning into the nine murder cases and an attempted murder case.

She said nine Lesotho nationals who were involved in illegal mining were stoned to death on Friday afternoon, allegedly by their fellow zama zamas from Lesotho.

Eighty-seven people have been taken in for questioning after the massacre of nine alleged illegal miners in Matholesville, Roodepoort, on Friday ...
News
1 year ago

"The bodies of the nine Lesotho nationals who are zama zamas were found lying in the streets of Matholeville while the 10th person was seriously injured just after 3pm. He was taken to a local hospital where he is being treated," Peters said.

She said the attack took place less than a day after police raided the place via SAPS's Operation O Kae Molao.

"The suspects are now accusing the deceased of being involved in criminal activities which attract the police into their illegal mining operational space."

Community members, however, insisted that Zimbabwean nationals were behind the attack and were upset at being exploited by Lesotho nationals who were running a syndicate, having a stranglehold on the vast number of disused mine shafts in the area.

Police brutality, sexual abuse and intimidation are some of the challenges zama zamas, particularly women, face in the mining sector.
News
1 year ago

"This has been going on for a while. The Sotho guys have claimed that the mines are theirs and have taken them by force. Anyone who wants to work in those mines has to have their blessings and have to pay them R300 when they go underground and another R300 when they resurface," said the community member.

"Most of the time they even take whatever loot that the Zimbabweans come up with at gunpoint and force them to go back underground and work some more. These guys from Zimbabwe were fed up because they cannot work for themselves and are not making a living anymore."

"They chased them all over Mathole and finally cornered them. There was a bit of a fight - we don't know how many of them there were - but the Sotho guys tried to fight back but were outnumbered," said the community member.

He said they were hacked and stoned to death while residents ran into their homes to hide from the violent scenes unfolding before their eyes.

"These guys are violent by nature, but to see them meting out that sort of violence against each other in front of our children was scary. The government needs to get rid of these people because they are putting our lives in danger."