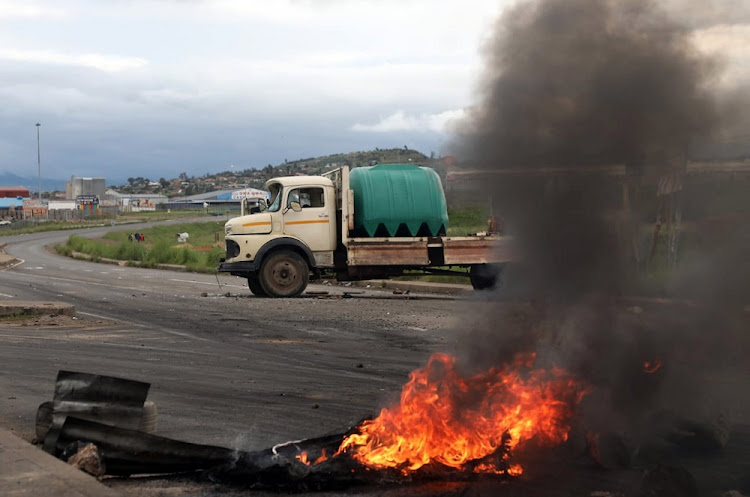 FILE IMAGE: (20 January 2020) The community of Phuthaditjhaba barricaded the road with rocks and burning tyres and vandalized a water truck in anger over the death of Mosa Mbele and not having water.
Image: Thulani Mbele

The total shutdown of Phuthaditjhaba and surrounding areas in QwaQwa, which started on Monday over water, has been suspended.

Organisers of the protest met a delegation from national, provincial and local government yesterday to discuss a solution for the water crisis in the eastern Free State town.

Community leader Scotch Sikhosana told Sowetan that the meeting lasted five hours and it was agreed that the shutdown be suspended.

“The decision was taken to temporarily suspend the shutdown but we agreed with them that they should scrap these contracts of the water tanks. While we are waiting, we need to invite the engineers today and check those pipes and valves. They should do that today and then determine when will the water begin to run from the taps,” Sikhosana said.

QwaQwa has been on a lockdown after taps ran dry in December. Angry residents went on a rampage blocking the streets and looting shops demanding that government provides clean water immediately.

Health services have almost collapsed in QwaQwa in the Free State due to the water crisis in the area and protests that entered a second day ...
News
2 years ago

Maluti-A-Phofung local municipality has been struggling to provide clean water for years in QwaQwa.

So  troubled is the municipality whose seat is Phuthaditjhaba, and also serves towns such Harrismith and Kestell, that national government forced it to go under administration in 2018. From that time to date the municipality had been failing to service its debt to Eskom and its water supplier, Sedibeng Water Board, which has now climbed to R4bn.

Things got worse last year when the drought hit the Free State province. The Fika Patso dam which provides over 80% of the water to QwaQwa saw its capacity dropping to a mere 10%. The water coming from the taps was not drinkable, leading to the department of water and sanitation urging residents not to consume it. But even that water depleted in December, prompting locals to fetch water from streams and rivers. Water  tanks sent by the municipality could not reach all the areas and the residents coordinated a total shutdown in retaliation.

The situation got worse when seven-year-old Mosa Mbele drowned in a river on Saturday while trying to fetch water.

A Dihlabeng District Municipality official who was accused of falsifying her qualifications to land a plush job in eastern Free State has provided ...
News
2 years ago
Next Article