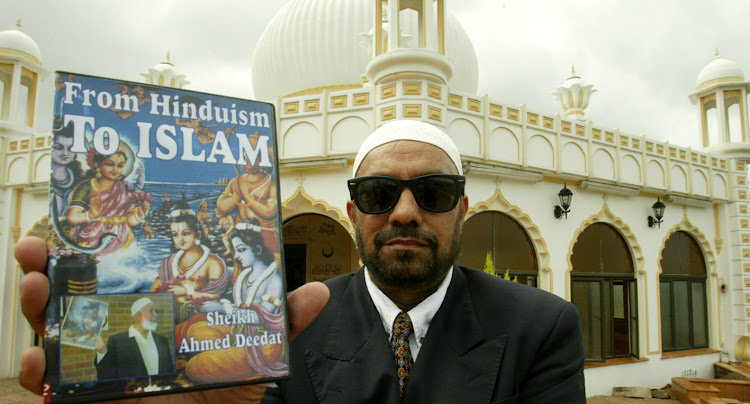 Controversial Islamic scholar Yousuf Deedat is fighting for his life at an undisclosed hospital after being shot in the head.
Image: Jackie Clausen

The family of controversial Durban Islamic scholar Yousuf Deedat has gathered around his hospital bed as he fights to stay alive after being shot in the head outside the Verulam Family Court on Wednesday.

Deedat, known for his contentious views on Christianity and Hinduism, was with his wife, Yasmin, when an unknown gunman opened fire on him before fleeing.

He was airlifted to an undisclosed private hospital.

His son, Raees, released a statement hours after the shooting, saying while Deedat's injuries were “severe”, the family remained hopeful that he would recover.

“He is in the intensive care unit. The next 24 to 48 hours are going to be important in terms of his recovery. He is pretty much stable at this point.”

Karim said it was a “difficult time for the family”.

“Everybody is shocked by the unexpected and extremely tragic incident,” he said.

A Mpumalanga man had to be admitted to hospital after being shot in the arm following an incident in which a mayor and his security detail allegedly ...
News
1 year ago

'Mayor was among those shooting at us'

A Mpumalanga man, who was shot in the hand during a protest in Siyabuswa, says he saw mayor Thulare Madileng fire shots at protesters. Mduduzi ...
News
1 year ago
Next Article