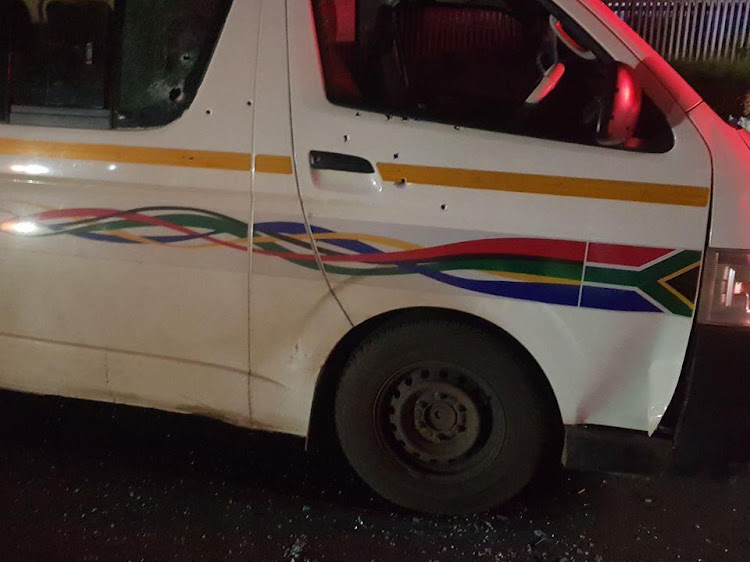 Three people, including a 10-month-old baby, were killed when gunmen opened fire on a taxi in Cato Ridge on Wednesday night.
Image: via Facebook/Brad Nathanson

A 10-month-old baby, a schoolgirl still in her uniform and a young man were killed when gunmen opened fire on the taxi they were travelling in at Cato Ridge near Pietermaritzburg on Wednesday evening.

According to private investigator Brad Nathanson, who attended the scene, the three were victims of an ongoing taxi war over routes.

The taxi had been travelling from KwaNyuswa to Cato Ridge when the attack occurred at about 8pm.

The baby's mother and brother, who were also shot, survived the attack.

“We could not have expected what we found on arrival. The driver's side of the taxi was riddled with bullet holes. Cartridges on the ground told me that an AK-47 had been the weapon of destruction.

“In the taxi lay a schoolgirl. Her young body contorted by the bullets that had ripped through her. A young man's body lay crumpled in front of the sliding door. It was obvious by the way that his body lay that he had attempted to flee from the gunfire and a baby who, if not for a single gunshot wound, would otherwise have looked like she was only sleeping.

“Her young brother had a gunshot wound to the back of his head, but it was only a graze and their mother had been shot in the stomach,” he said.

Nathanson described the agony while emergency workers treated the injured.

“There was so much agony in the air with women crying, people groaning from pain and sirens approaching.

THREE MURDERED. OTHERS SERIOUSLY INJURED. 20h00 15 January 2020 Cato Ridge A ride home in a taxi from KwaNuswa to...

“Cowards!!! The men who did this are cowards. What type of person kills innocent people over a taxi route??? What kind of person instructs this kind of action??? Aside from the first aid that we administered we were otherwise helpless. Lives ripped apart, serious injuries to others and thugs on the run. What a hopeless situation. How dire the state of our country?” Nathanson wrote on Facebook.

“It is alleged that last night at 19:30pm, a 37-year-old taxi driver was driving along Eddie Hagen Drive in Inchanga when a silver vehicle passenger opened fire towards the taxi.”

“The injured passengers aged between four months and 40 were taken to hospital for medical attention. The motive for the shooting is still unknown,” she said.

The families involved in a violent street brawl in an estate in Kyalami, Midrand, have decided to “shake hands” and resolve the matter outside court.
News
1 year ago

A woman was hijacked, cars were burnt, firearms illegally discharged and tyres spun in Pietermaritzburg on Friday allegedly as a tribute to a dead ...
News
1 year ago
Next Article