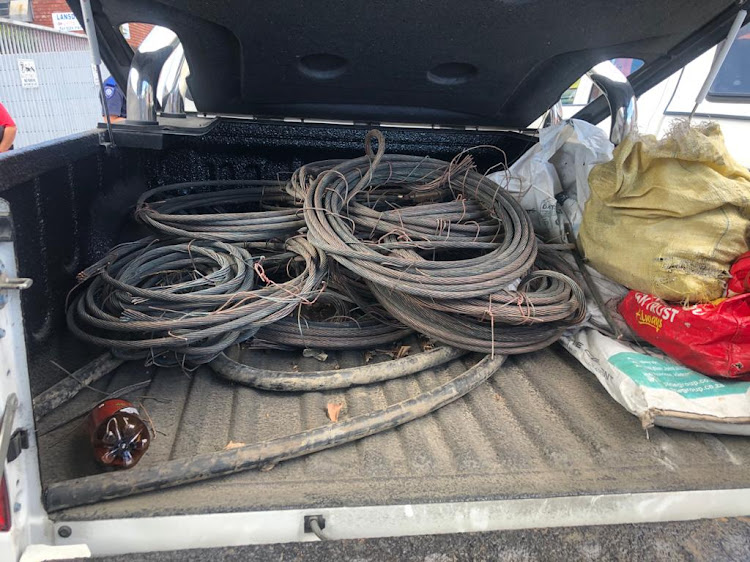 Lansdowne officers acted on information that a Nissan bakkie and Mazda bakkie were being loaded with cables in Wetton Road.
Image: City of Cape Town

Four suspects were arrested after they were found in possession of 303kg of railway cables in Cape Town, police said on Friday morning.

Police spokesperson Siyabulela Malo said Lansdowne officers acted on information that a Nissan bakkie and Mazda bakkie were being loaded with cables in Wetton Road.

The two vehicles were seized and the suspects aged between 24 and 34 were arrested before they could enter a local scrap metal yard.

Malo said the railway cables had an estimated value of R83,000.

The suspects are expected to appear in the Wynberg Magistrate’s Court soon.

In a separate incident in Durban, a 30-year-old man was arrested for stealing Telkom cables near railway tracks on Orient Drive.

Police spokesperson Captain Nqobile Gwala said three men were allegedly stealing the cables and loading them into a truck when officers pounced.

Two of the men managed to flee the scene on foot.

The cables were valued at R400,000. Police confiscated the truck, a pickaxe, chainsaw and other tools.

Eskom needs a new board

Deputy president David Mabuza made an extraordinary claim yesterday that the Eskom board and the public enterprises minister lied to President Cyril ...
Opinion
2 years ago