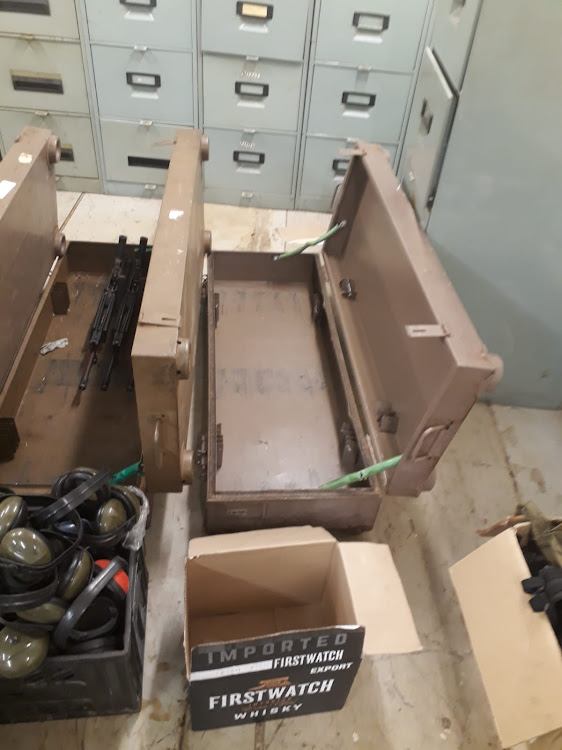 Nineteen R4 rifles are believed to have been stolen from a military base at Lyttleton, near Tshwane.
Image: Supplied

The SA National Defence Force (SANDF) says suspects have been taken in for questioning after the theft of weapons at a military base in Pretoria.

The theft outraged DA shadow minister of defence Kobus Marais, who said the defence force had “let the nation down”.

“The SANDF has let the nation down, as criminals were allowed to stroll into the Lyttleton military base and walk off with at least 19 R4 automatic rifles, manufactured for extreme warfare,” Marais said in a statement on Tuesday.

“It is outrageous to even consider that access could be gained into a supposedly highly protected military facility and further grind open a volt where ammunition is kept.”

“What does this hold for South Africans in a time when they need to know the SANDF will keep them safe, as per the requirements of section 200 of the constitution? It certainly poses various questions about the preparedness of the SANDF to not only protect us as citizens, but the supposedly safe and protected military installations all over South Africa,” Marais said.

The SANDF had earlier issued a statement about the incident.

“The South African National Defence Force herein confirms an incident of a break-in where weapons were stolen at Engineering Formation, Lyttelton Tek Base. Investigations are under way and a few suspects have been taken in for questioning,” said SANDF spokesperson Siphiwe Dlamini.

Police minister Bheki Cele has called on law enforcement officers to prioritise the protection of women and children over the festive season.
News
2 years ago

Members of Umkhonto weSizwe (MK) can revive the ANC and unite party towards the realisation of economic freedom. This is according to ANC ...
News
2 years ago

Marais said this was not the first time the military had shown its failures.

“This is a stark reminder of earlier thefts of similar weapons at the 9SAI military base outside Cape Town, as well as the use of similar military rifles in various bank and cash-in-transit heists,” he said.

The DA questioned how the latest break-in had happened, saying there were questions the SANDF had to answer.

Marais asked how the criminals had got their hands on the vault key, whether this could have been an inside job, where the guards were positioned and why they failed to foil the break-in.

“This embarrassing robbery is a symptom of bigger problems in the SANDF,” Marais said.

He called on defence minister Nosiviwe Mapisa-Nqakula, commanding officers and other seniors to cancel their holidays to investigate and find the stolen arms.

“It is their constitutional responsibility and is the least they should do, to show South Africans they are serious about fighting crime and upholding the security of the country.”