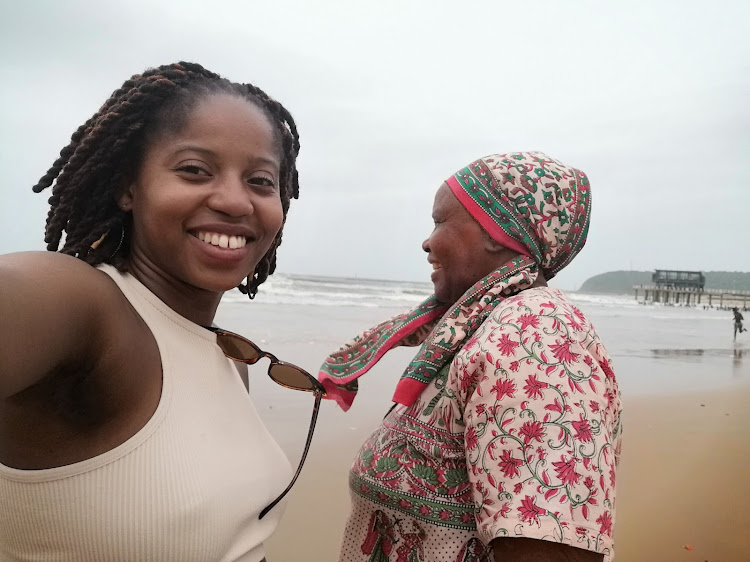 Keitu Kente made one promise: “When I get accepted to university and graduate, I am taking my grandmother to see the ocean for the first time.”
Image: Keitu Kente via Twitter

“I was a bit scared when I set my foot on the beach, but it was an exciting moment.”

These were the words of an elated 76-year-old Sarah Tlhako, whose granddaughter Keitumetse made her lifelong dream of seeing the ocean come true this week.

Keitumetse, a diagnostic radiography student from the University of Johannesburg, tweeted a picture of her and her granny on their adventure.

She said her mother had told her that she should take Sarah to the beach after she graduated, as she had never seen the ocean before.

“I'm at a loss for words. She loved it. She was terrified, but she really loved it. She stood still waiting for the waves to hit her and then she was shook at the sand crawling away from her feet with the tide. Overall 11/10. I'm more than satisfied,” read Keitumetse's tweet.

Speaking about her experience, Sarah said: “I was a bit scared when I set foot on the beach, but it was an exciting moment. It was my first time going to Durban. I am so happy. I don't know how to thank my grand daughter for this. I wish God can keep her and grant her all her wishes.”

But the surprise was also how they would get there.

“We told her we were taking a bus because she said she did not want to fly. When we got to the airport, she was surprised that we were actually flying,” Keitumetse said.

“I was scared of flying, but when I boarded the plane, I realised it is just like a taxi,” the granny said.

They were joined on the weeklong trip to Durban by Keitumetse's mother. They were set to return to Rustenburg on Saturday.

They also went to the uShaka Marine World aquarium.

Kente said her grandmother wasn’t convinced that the fish at the aquarium were real — because “we saw sharks in the same tank and they didn't eat the fish”.

“We tried to explain to her but she's not having it. She has concluded that about of the fish are 3D and the sharks are fake so that's that.

“The babez didn't come to see the fish being cute with the sharks. She came for about live action,” she tweeted.

Keitumetse said the trip was also a “dream come true” for her.

“You never say you'd make [it] this far and do something for your parents while they are still alive. People grow old and die without realising their dreams,” she said.

I'm at a loss for words. She loved it. She was terrified but she really loved it. She stood still waiting for the waves to hit her and then she was shook at the sand crawling away from her feet with the tide. Overall 11/10 ❤️
I'm more than satisfied https://t.co/k0qZqBZ4ly pic.twitter.com/ZiVGIyaGvS

Day 2
Oumama got into her swimming costume and into the waves. She's not afraid of the water anymore.
??
A mermaid. A bbz! ❤️

Thank you guys so much for the kind messages.