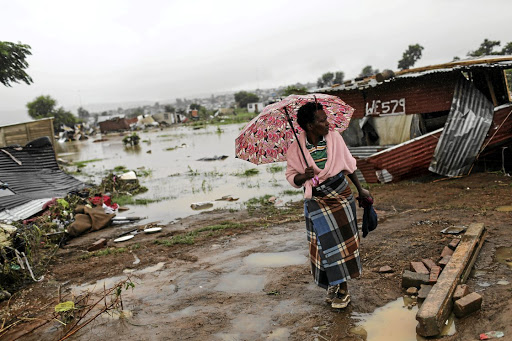 Residents of Eerstefabriek informal settlement in Mamelodi have been hit hard by floods./Alaister Russell

Two people have lost their lives with hundreds displaced as a result of floods which have swept away over 700 shacks in Mamelodi, Pretoria.

A body of a man believed to be between 30 and 35 years of age was discovered in Centurion, following heavy flooding, while another died of
electrocution in Soshanguve, north of the capital.

Dlamini-Zuma said the government was trying to find a more permanent solution for displaced people who have been sheltered in community halls and local churches.

"More than 500 are already displaced but the situation is getting worse, there could be more people getting displaced," Dlamini-Zuma said.

She said a national joint operations committee involving the police, defence force and departments such as home affairs and social development has been established due to the extent of problems.

Over 30 people were stranded at the Centurion Hotel on Monday afternoon due to flooding, while several shacks in Eerste Fabrieke, Mamelodi, have been ...
News
1 year ago

The Eerstefabriek informal settlement, which the minister visited, is the most affected area in Mamelodi as hundreds of shacks are built on the flood line closer to the river banks.

One of the women temporarily housed at a Mamelodi community hall went into labour yesterday morning.

The heavily pregnant Sonia Mjovi, 38, originally from Bushbuckridge in Mpumalanga, was rushed to Nellmapius clinic after her waters broke.

Mjovi is among about 150 Eerstefabriek residents who were rescued on Monday after their shacks were either flooded or dragged away by the raging Moretele River which burst its banks following days of heavy rainfall.

One of the women housed at a Mamelodi community hall after her shack was flooded went into labour on Tuesday morning.
News
1 year ago

There was panic inside the hall when her waters broke. A woman then offered to drive her to the local clinic where she gave birth upon arrival.

Rain continued to fall in the area yesterday as hundreds of homeless people waited at the Nellmapius community hall with most of them having the clothes on them as their only possessions. Churches and residents donated bread and soup.

Maile said the problems were largely due to lawlessness which has seen more than 100 new informal settlements emerging in Tshwane since 2016, with most of them situated in unsafe areas.

"The most important element in dealing with the long-term solution is to ensure that there's law and order because of you look at what's been happening in Johannesburg and Tshwane, it points to anarchy and chaos... the number of new informal settlements has skyrocketed."

Local councillor Kgomotso Masilela said most of the shacks wiped out by the floods were recent as they were built in the past two-and-a-half years.

A Mamelodi West woman lost everything when her informal settlement was hit by flash floods yesterday.
News
1 year ago

Mamelodi Sundowns' league encounter against visitors Stellenbosch FC is at the mercy of Eskom’s loadshedding schedule and there are no guarantees ...
Sport
1 year ago

Scores of people, including staff, were rescued and airlifted from the Centurion Hotel on Monday afternoon following floods.
News
1 year ago
Next Article