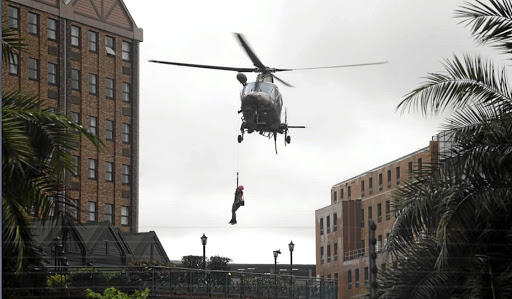 A Mamelodi West woman lost everything when her informal settlement was hit by flash floods yesterday. Her three-room shack was swept away.

Kate Raboroko and her two children were left homeless after only managing to escape their flooded shack at the Eerste Fabrieke informal settlement with just the clothes they were wearing.

"My shack was situated next to the river. I lost all my belongings, including clothes, ID book and birth certificates of my two kids," Raboroko said.

Raboroko is one of more than 700 people whose shacks in Mamelodi West were either flooded or swept away after the raging Moretele River, on whose floodplain the sprawling township has been established, burst its banks.

Raboroko and her two children, aged seven and 10, spent the night at a local community hall.

"I could not save anything because there was just no time... I was more worried about the safety of my kids."

Scores of people, including staff, were rescued and airlifted from the Centurion Hotel on Monday afternoon following floods.
News
1 year ago

Raboroko said she only realised at 7am yesterday that the river's banks had burst and water was rushing to their shacks.

"I saw water coming inside my shack and I immediately took my kids and ran to safety."

Some of the residents were rescued from their rooftops after trying to escape the rising waters.

Furniture and home appliances such as TV sets were seen floating on the water, as the floods flushed them out of homes.

Other affected parts of Tshwane included Centurion and Capital Park, where several roads leading to low-lying bridges were closed. At the Hotel Centurion Lake, guests and staff were airlifted to safety as the facility near the bank of Hennops River was surrounded by flood waters.

DA ward councillor Gert Visser said disaster management and emergency services were assigned to the area since 3am yesterday.

"The water pressure from the floods caused a slight movement to the hotel building and the only way people could get out was by helicopter," said Visser.

The body of a man who was trapped in his car when it was swept away by flood waters near Hartbeespoort Dam has been recovered.
News
1 year ago

He said 71 guests were counted before the evacuations took place, making it 80 with staff members.

The City of Tshwane said no injuries were reported and there were no reported cases of people missing so far.

The city's disaster management team was on the ground assisting those needing to be evacuated. The city urged those that needed help to call the city's emergency toll-free number: 107.

"Water levels in that area have subsided. Five houses were flooded while an informal dwelling close to the river bank was swept away," Radebe said.

Resident John Chauke said: "We have not seen so much water in the area in a long time, houses have been swept away and we fear for our lives."

Maria Ledwaba, who has been living in the informal settlement for nine years, said she feared for the lives of those who live in the river banks. "We are in low-lying areas, unfortunately, we are at risk of losing everything... even our lives." - Additional Reporting by Tankiso Makhetha

Over 30 people were stranded at the Centurion Hotel on Monday afternoon due to flooding, while several shacks in Eerste Fabrieke, Mamelodi, have been ...
News
1 year ago

More rain coming on the weekend

Residents living in the low-lying areas of Gauteng are on panic mode as the rain keeps falling.
News
2 years ago

Floods will happen no matter what is done, but building water-sensitive communities and investing in early-warning systems will lessen the impact of ...
News
2 years ago
Next Article