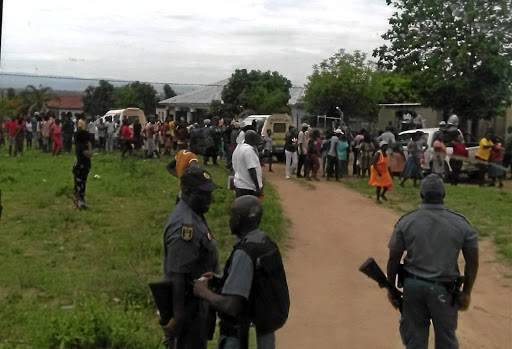 Police and residents gather outside a home where Portia Ramakavhi, inset, was killed in Tshino village. / SUPPLIED

A woman who was chopped to death, allegedly by her boyfriend, was warned to file for a protection order after years of physical abuse.

Portia Ramakavhi, 35, from HaMutsha village, outside Thohoyandou in Limpopo, was stabbed with a sharp object on her upper body and chopped with a panga on her head on Saturday.

Ramakavhi's uncle Owen Mulovhedzi told Sowetan yesterday he had on several occasions advised his niece to secure a protection order against her abusive boyfriend, fearing he would kill her one day.

"She took my advice lightly. I said this because I could see the man had turned her into a punching bag. He would even beat her inside my yard."

Mulovhedzi said he secured a protection order against the man earlier this year. "After he assaulted her in front of me in my yard, I went to the police and got a protection order. I even told Portia to do the same but she only promised to do so."

The uncle said the family was now facing a mammoth task of raising Ramakavhi's six-year-old daughter.

"We are still going to explain to her when she grows that her mother was killed. It is a painful thing to say to a child."

Mulovhedzi said the law must take its course.

"It is alleged that the suspect accused his wife of cheating and after a heated argument, he then stabbed and chopped her with sharp instruments. The victim died on the spot. Angry community members pursued the suspect, caught him and started beating him up," he said.

Mojapelo said the police were called and the 45-year-old suspect was taken to hospital where he was admitted and placed under police guard.

His family said that the man, who cannot be named until he appears in court, returned home very angry on Friday.

His cousin said the man accused his girlfriend of cheating after coming back from her place on Friday.

"He didn't say much because he was drunk. The next day, he invited her to his mother's house and argument ensued in the house," she said.

"The incident shocked us, we didn't think he was capable of something so horrible. They were not staying together, she only came to visit."

The cousin said the pair had been dating for five years.

"The SAPS will deal decisively with any perpetrators of gender-based violence and this arrest should send a strong message about our determination to stamp it out."

MEC for social development Nkakareng Rakgoale said: "The very sad state of affairs cannot continue. We simply can't comprehend what drives some men to do this to the very people they have vowed to protect and love.

"The impact on families, especially children, in such cases, is just too huge to comprehend. Men need to understand their boy children will emulate their actions and therefore, we need men to take the biggest stand against this scourge."