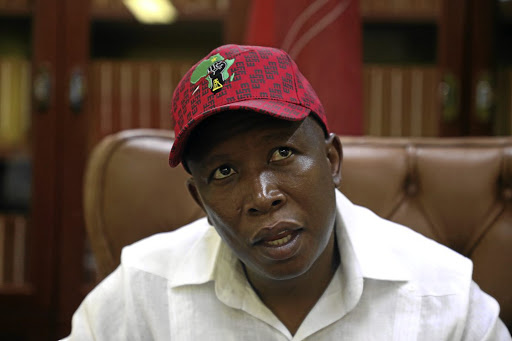 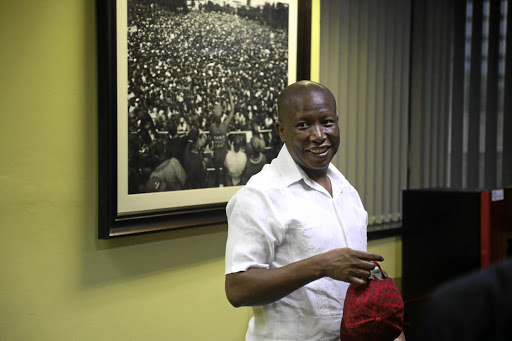 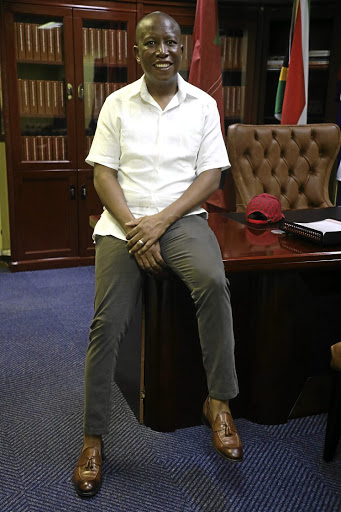 If you were to be blindfolded, dropped at the entrance of a corner office on the third floor of the Mineralia Building in Braamfontein, Johannesburg, and then have your eyes uncovered, you'd probably think you had landed in the office of a head of state.
Very little tells you that you are in the office of the chief rebel himself, the fighter-in-chief against "white monopoly capital".
There is the obligatory red EFF flag behind the main chair of the office, but it is almost overshadowed by the flags of South Africa and Fidel Castro's Cuba.
I am in this huge office, which by my estimation can easily fit three RDP houses, to meet Julius Malema, whose Economic Freedom Fighters will be heading to their second national elective assembly next Friday.
A long brown desk occupies one side of the office, with a designer book shelf behind it. At the centre of the office is a spacious meeting area with comfortable chairs and lovely couches facing a wall-mounted television set.

For a man who is preparing for what promises to be a hotly contested conference, Malema looks relaxed in his white Cuban shirt and EFF baseball cap. Although there is little doubt that he'll emerge from the national people's assembly as a re-elected commander-in-chief of the EFF, he goes into the meeting with a number of storms gathering around him.

He has been in the news lately regarding houses worth millions of rands in Sandton and his hometown in Limpopo, expensive cars, including a Mercedes Benz V-Class and tailored suits, among others. His name keeps coming up whenever the VBS bank scandal is mentioned.

Where in the world have you had a democratically elected government tolerating the blatant incompetence and corruption in such a critically important ...
Opinion
2 years ago

There have also been court cases ranging from charges over allegedly discharging a firearm in public to one of assaulting a police officer.

The National Prosecuting Authority recently confirmed that it is reinstating charges against some of his associates in a Limpopo corruption case dating back a number of years.

All of this, Malema insists, is part of efforts to taint his image. "Theirs is to just put a crown of thorns on my head without the real prosecution. I've never been found guilty, the intention is just to taint me and destroy my character... they will never take me to jail," he says.

"You ought to sit back and ask the question, why would these people not take this guy to prison? What power does he have? I'm not in the state, I don't control the state, I'm not a monopoly, I don't own means of production, I do not control the economy. Why would such a corrupt person not be locked up in jail?

"What power does Julius have which makes it impossible for him to be locked up? If there was any case against me, they would have prosecuted me and sent me to jail for a very long time."

If his desk is anything to go by, what occupies Malema's mind these days is the upcoming people's assembly, where about 4,000 delegates will decide on party policies and elect new leaders.

Pre-assembly discussion documents occupy a prominent place on his desk.

One of the key topics in them is Malema's proposal that the EFF get rid of its university wing, the EFF Student Command.

His relationship with the Student Command has not been smooth, especially since he made public his views that it was not independent and relied heavily on the national leadership and was irked by its focus on rich and well-established universities.

".From time to time we have to leave our responsibilities to go and help them because they can't help themselves," he says.

"So I was provoking a debate: do we need a Student Command? can we do without them and if we need them what must be done to strengthen them to be where they are?" Malema asks.

"They've fought good battles, they've made serious inroads and achievements but they don't exist in more 30% of campuses in SA.

"I said to them, why shouldn't I go to the NPA and ask that we dissolve you to provoke a debate. So they must come and plead their case and say you're mad, this is what we have achieved."

Malema also wants the meeting to discuss the party's approach to coalition governments given its experience in metropolitan areas like Johannesburg, Tshwane and Nelson Mandela Bay Metro, where it initially helped the DA form local governments.

"Well, coalition politics is going to be with us for some time now, especially with the emergence of a lot of political parties and with the citizens not being decisive.

"We are left with no option but to subject ourselves to that arrangement of coalitions.

"Coalitions can work. We were working very nicely with (Herman) Mashaba in Johannesburg, there was no problem. Mashaba mastered the politics of coalitions

"You have to consult even on stupid things because you may think they are stupid but they may be big on the other side, the other people may be offended by you taking a decision not speaking to them."

The run-up to the party's elective conference this year has been marred by allegations of Malema having his own preferred list of leaders.

He is said to be behind a campaign to have current national chairperson Dali Mpofu and secretary-general Godrich Gardee replaced.

But what if he does not get his way?

"I am prepared to work with anyone the conference elects ... I will subject myself to the leadership which is elected ." he says.

Since his days in the ANC Youth League, Malema has had a reputation as a "dictator" who does not take kindly to those who challenge him.

But he says such an accusation comes from people who can't compete with him in terms of ideas and leadership.

"They contest me, they don't win, they bring their ideas they don't find resonance and they say that I'm a dictator," he says.

But what if any of the current EFF leaders decides to stand against him and wins, will Malema accept defeat?

"It's [EFF] not my family property, it's not my fridge or a stove, it's the people's property," he says.