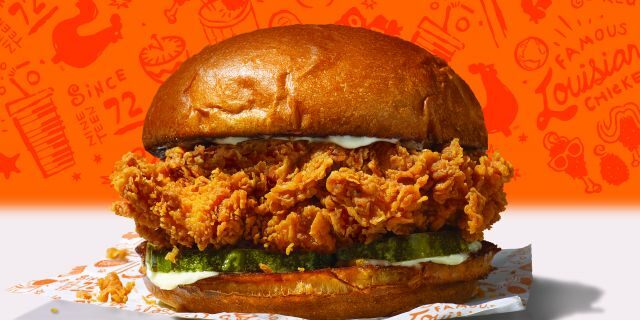 Popeyes US has brought back its chicken sandwich.
Image: Supplied/ Popeyes US

While Mzansi has been busy with the Springboks winning the Rugby World Cup (RWC), over in America people are losing their manners, and lives, over chicken sandwiches.

You see, just months after pulling its chicken sandwich from menus because of crazy demand, Popeyes has brought it back to even more chaos and disorder.

Social media has been filled with videos of people buying the sandwiches en masse and being petty enough to block people from getting theirs in drive-throughs.

However, it reached a new level of hectic recently when Fox 5 reported that a 28-year-old man was stabbed to death over one after an altercation with another customer.

Police say an argument broke out between two men at a Popeyes in Maryland when one of them cut in.

The fight spilled into the street, where one of the men was stabbed. He was rushed to hospital, where he died.

What the hell is in that sandwich?

This week, ABC reported on a fight that broke out in a Popeyes' queue at a mall in Nashville, Tennessee.

SA-born comedian Trevor Noah weighed in on the stabbing, saying: "People are getting stabbed over a chicken sandwich. I guess it really is healthier to be vegan.

"The craziest thing for me is that someone got stabbed, but everyone else stayed in line. They were like, 'wow, that is horrible, but you know what else is horrible? If I didn't get my chicken sandwich'."