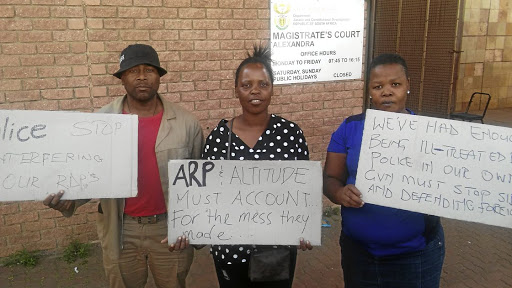 Four people accused of evicting foreign nationals from government houses have vowed to continue with their operation despite spending two nights in jail.

The four were not asked to plead on the charges and were released on R500 bail each.

Speaking after being released on bail, Cele said the group known as "Dudula" (to push) was not moved by the arrests.

"Nothing has changed. I still feel the same way as I did before the arrest. I do not see anything wrong with what we are doing. We just need an intervention of government to help us in our operation.

"We are not stopping anything. We will carry on with our operation. We are saying 'viva to Dudula'," Cele said.

The four were arrested on Saturday afternoon following an eviction of a woman suspected to be Mozambican in Alexandra Extension 9.

Prosecutor Nduduzo Jiyane described Dudula as a notorious group which had evicted many families in Alexandra.

"They tend to break people's properties and even assault them," Jiyane said.

As the four walked out of court, fellow Dudula members rejoiced and hugged them.

Over the past year, Dudula had been conducting most of its evictions on weekends and left a lot of people homeless.

Their aim, as they say, is to rid all government developments of foreign nationals who are not supposed to benefit from state-funded housing programmes.

Dudula has been evicting people in Alexandra and surrounding areas, claiming the government had failed to act on illegal occupation of subsidised houses by foreigners.

Evictions are conducted without a court order and the occupants of the houses are thrown out onto the streets.

The vacant house is then allocated to local people who are on government's housing list.

Gauteng MEC of human settlements Lebogang Maile who, ironically is from Alexandra, has constantly condemned the evictions but said police were competent to act against criminality.

Some of the victims Sowetan has spoken to were naturalised South Africans, while others were people born in the country by parents who were foreign nationals.