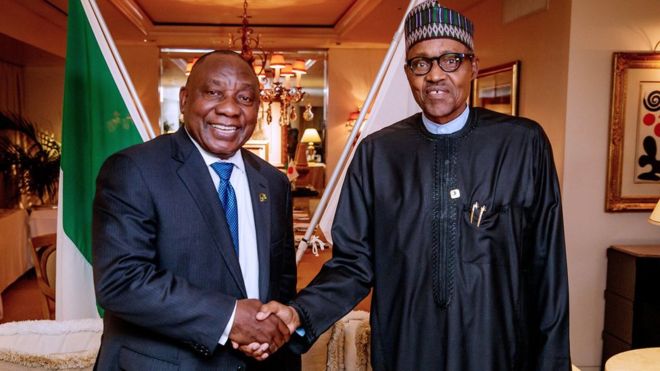 President Cyril Ramaphosa has emphasised the need to promote economic integration on the continent, saying the growth of SA's economy depends on trade with other African countries.

He said this in his weekly newsletter, which this week focused on last week's state visit to SA by Nigerian president Muhammadu Buhari.

According to Ramaphosa, for trade among African countries to work, Nigeria and SA, as the continent's largest economies, needed to maintain good relations.

This comes after foreigners living in SA, including Nigerians, were attacked last month, causing a diplomatic fallout between the two countries.

This prompted Buhari to visit SA, which Ramaphosa said was “an extremely successful visit”.

Muhammadu Buhari, the Nigerian president, has called on his countrymen to respect and abide by the laws of their host nation.
News
2 years ago

“President Buhari and I both firmly believe that the prosperity and stability of our two nations, and all other countries on the continent, requires that South Africa and Nigeria have strong relations at an economic, trade, social, political, diplomatic and people-to-people level,” wrote Ramaphosa in the newsletter.

“This will result in a much more integrated and more cohesive Africa.

“South Africa’s future lies in Africa and it is through our trade with the rest of the continent that we will grow our industries,” he said. “The African marketplace is where our companies will increasingly find trading and investment opportunities.

“It is expected that over the next few decades there will be a massive increase in investment in infrastructure across Africa, which should benefit South African construction companies, manufacturers and banks.”

Ramaphosa acknowledged that many African countries' economies were growing at a faster pace than that of SA. It was for this reason, he said, that SA signed the African Continental Free Trade Area pledge to ensure the country benefits from the economic growth of the continent.

But these efforts, he added, had been dealt a major blow by the recent violent attacks on foreigners..

Cooperation will benefit all of Africa

We hope the message of peace and unity from President Cyril Ramaphosa and his Nigerian counterpart reached the intended audience.
Opinion
2 years ago

“With our relatively established manufacturing base, our developed road, rail, port and energy infrastructure, and our deep financial markets, South Africa is well placed to make use of the opportunities a free trade area could provide,” said Ramaphosa.

“The recent public violence targeting foreign nationals has challenged our efforts to build stronger ties with other African countries. Fueled by misinformation spread on social media, these attacks provoked much anger in different parts of the continent, leading to threats against South African businesses and diplomatic missions.”

Nigeria and SA cannot exist in isolation, as strong economic relations, beneficial to both countries, existed, he said.

“Nigeria and South Africa are important for each other’s economies. More than 100 South African companies have investments in Nigeria and over 1,700 have active trade relations in the country.

“Trade between the two countries was worth around R50bn last year, with South Africa importing a significant amount of its fuel from Nigeria.”