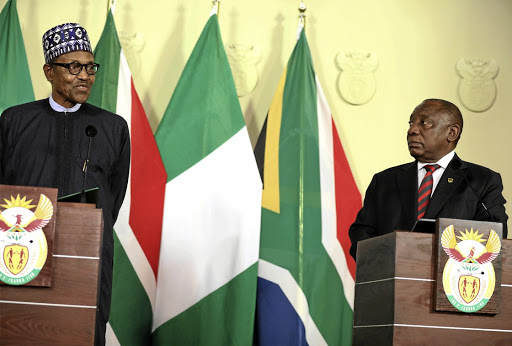 Nigerian president Muhammadu Buhari visited his counterpart President Cyril Ramaphosa for the first time since the national general elections in South Africa, which took place in May. /ANTONIO MUCHAVE

Muhammadu Buhari, the Nigerian president, has called on his countrymen to respect and abide by the laws of their host nation.

Buhari is on his first official state visit to SA since the national general elections in May to strengthen ties, especially in trade and investments, between the two countries.

But the recent spate of xenophobic attacks on foreign nationals in SA dominated his discussions with President Cyril Ramaphosa.

Relations between the two countries soured following the attacks, and SA businesses in Nigeria were also targeted in retaliation.

Buhari, who during the height of the attacks sent a team to meet Ramaphosa to ensure the safety of his people, has now called on Nigerians to respect SA laws.

"When you are in a country, you study the people and the laws and you get yourself in line with the authorities and the people," said Buhari.

"If you do anything outside the people's understanding and agreement, eventually they will not accept it. This is a very well-known thing and we discussed this thing as I said in depths with the president."

The attacks are said to have been sparked by accusations of Nigerians conducting illegal businesses in SA including dealing in drugs. Ramaphosa
also maintained that if there was any truth to this, the law will take its course.

"So on this, we are unanimous, we are clear between ourselves that the rule of law must be observed by everyone who seeks to operate, live in any of the two countries," said Ramaphosa.

The two presidents signed a total of 32 bilateral agreements in various sectors including trade and industry, investment, energy, defence and security, immigration, justice, and police, among others. One of them was on how the police and intelligence must put in place mechanisms to prevent future tensions.

One of the agreements the two nations signed provided 10-year visas for business people operating in both countries to contribute greatly to their economies.

Home affairs minister Aaron Motsoaledi said the visa agreement came as a result of business people in both countries complaining about requirements that make it
difficult to conduct business.

During a joint media briefing at the Union Buildings, Buhari said he had agreed with Ramaphosa that the two countries would initiate measures to ...
News
1 year ago

The presidential special envoys have told heads of states in West African countries that South Africans are generally not xenophobic, despite attacks ...
News
1 year ago
Next Article